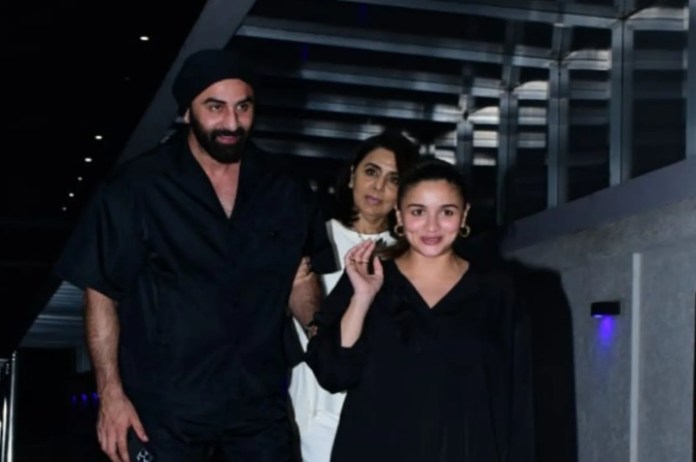 New Delhi: Ranbir Kapoor and Alia Bhatt are one of the favourite couples of Bollywood, and fans are excited to see them together. They are often spotted together. At the same time, they both are spotted together in Bandra but this time they were accompanied by their mother Neetu Kapoor. The video of the Kapoor family has been getting viral on social media. In the video, the paparazzi ask them to click photos together.

In this video, Alia Bhatt donned a black colour short dress and made a hair bun, the actress is looking very cute in this outfit. On the other hand, Ranbir Kapoor is also seen in a black look paired with white shoes in which he looks quite handsome. Meanwhile, Neetu Kapoor is looking amazing in a white outfit.

Soon the paparazzi saw Neetu Kapoor along with Alia-Ranbir, and they started saying, Neetu ji…Neetu ji, after which she says hello to the paparazzi, and then everyone sits in the car and leaves. The video got thousands of likes. At the same time, fans are commenting openly after watching this video. While commenting, a user called both of them ‘Love’. With this, another user praised Alia’s look. Many users have dropped heart emojis.

Also Read :- Thank God Diwali Trailer Out: Ajay Devgn reminds Sidharth Malhotra of his sins in a battle of life and death

Alia Bhatt married Bollywood actor Ranbir Kapoor this year. The two dated each other for almost five years and then tied the knot in the presence of the family. Along with relatives, only close friends attended Ranbir-Alia’s wedding. At the same time, both of them are seen together for the first time in Ayan Mukerji’s film ‘Brahmastra’, and they are going to become parents soon.