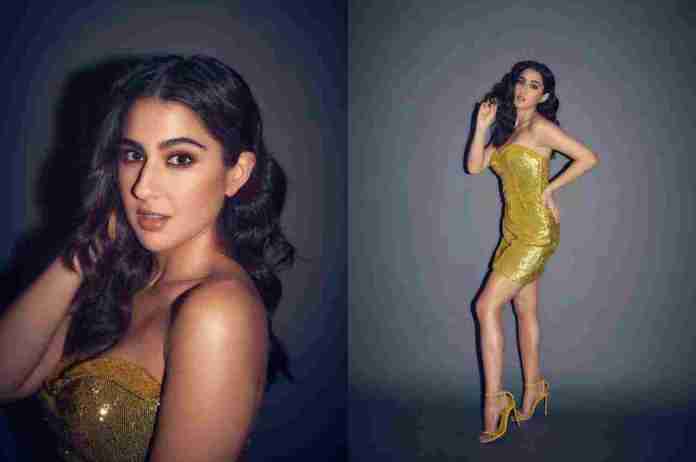 New Delhi: The OTTplay Awards 2022 were attended last night by the biggest names in entertainment. The event was the nation’s first-ever pan-Indian OTT awards ceremony to honour the most captivating OTT movies, TV shows, actors, and filmmakers. Stars like Vidya Balan, Kartik Aaryan, Neha Dhupia, Raveena Tandon, Hina Khan, Taapsee Pannu, and other actors were on the guest list. Sara Ali Khan, who was also present at the occasion, shone on the red carpet in an elegant off-the-shoulder minidress.

Sara showed up to the event wearing a yellow mini bodycon outfit. At the event, the Atrangi Re actor posed and grinned for the cameras and even discussed the shows she has recently binge-watched. She acknowledged watching Delhi Crime 2 with her mother and praising Shefali Shah’s performance.

For the night, Sara opted for a golden yellow strapless mini-length dress with a plunging sweetheart neckline revealing her décolletage, shimmering embellished sequins, gathered details on the side, an asymmetric hem, and a figure-hugging silhouette to emphasise her lean frame. Fans were bowled over by Sara’s chic look. Her stylist also dropped a comment and called the Atrangi Re actor ‘cutie hottie’. Sharing pics, Sara wrote, “Olive you so much”.

Meanwhile, on the work front, Sara was last seen in Aanand L Rai’s Atrangi Re. Next, she will be seen with Vicky Kaushal in Laxman Utekar’s next. She also has Gaslight with Vikrant Massey in her pipeline.

Sara made her Bollywood debut with Abhishek Kapoor’s Kedarnath. She then featured in Simmba opposite Ranveer Singh.