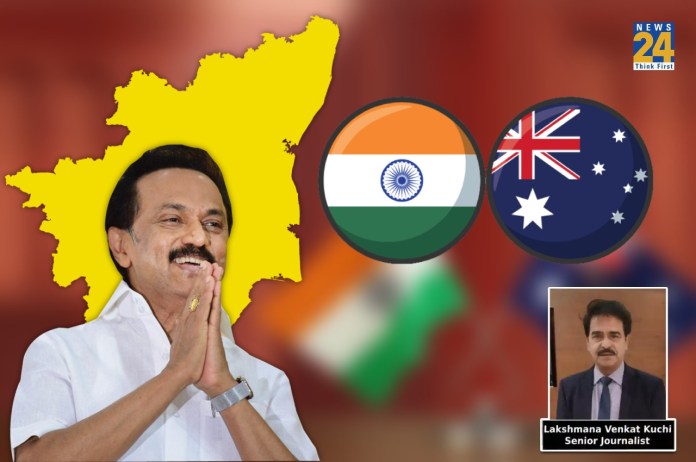 Tamil Nadu Chief Minister MK Stalin, long lived under the shadow of his illustrious father M Karunanidhi, is proving to be a quiet and quite a revelation – what with his out of the box thinking and a determined focus in policymaking and governance initiatives separating him from his contemporaries in the country.

Take for instance, the handling of the economy – given his own lack of knowledge and skills in this technical arena, Stalin entrusted the job to a professional and given the state finance minister Palanivel Thiagarajan a free hand but with a tight brief, to bring state economy back on tract and put it on the growth track.

Tamil Nadu also happens to be the one state that is ready to reap the benefits accruing from a national trade agreement India has signed with Australia that has come into force from December 29. With good policies, efficient infrastructure and employable workforce, Tamil Nadu has positioned itself from benefitting from the India-Australia Economic Cooperation and Trade Agreement (ECTA) in its key focus areas of Agriculture, Food, Leather, IT & ITES, and Pharma.

Ganapathi Ramachandran, chairman, Trigyn Technologies, and chairperson of IIT Madras Entrepreneurs Forum, said the agreement paves way for greater investments from Australia into Tamil Nadu that will obviously lead to employment generation for both skilled and semi-skilled workers. “There will be greater collaboration on research, development and innovation, apart from more favourable terms for students for their visas and work,” he said.

Tamil Nadu is also to benefit from the exports, especially several labour-intensive goods like textiles and apparels, agriculture, leather, footwear, furniture, jewellery, engineering, pharmaceuticals, and medical devices as they will gain duty free acceptance in Australia. And quite logically, it would be reasonable to expect increased investments in the above sectors in Tamil Nadu.

As it is Tamil Nadu’s traditional strength is exports in these sectors and needed minor policy tweaks to take full advantage of the agreement with Australia, Ganapathi said and added the biggest advantage the state possessed is that it has a thriving education & research ecosystem. Besides, the state already has focused agencies like Guidance TN (for investments & exports), FaMe TN (for MSMEs) and TANSIM (for Startups & Innovation) which can ensure that the FTA can be fully utilised by all industry stakeholders.

Now, this is the handiwork of the Stalin government in its first year in office. The focus of the government appears to be to leverage its strengths in industrial development export growth and investment promotion.

Read More :-NEWS24 MANTHAN 2023 LIVE: WHAT DID GOVT DO FOR INDUSTRY, INVESTMENT IN CHHATTISGARH; KNOW HERE

Concurred, A Sakthivel, president, Federation of Indian Export Organisations (FIEO). According to him, textiles and garments would gain immensely, along with opportunities for the handloom sector. Other segments the state can gain a larger market share includes gems and Jewellery, leather and non-leather footwear segment, handicraft, auto parts and engineering products. Exports from Tamil Nadu to Australia was $384 million in FY 21- 22, and is already at $322 million in the current financial year from April to October. “[It is] expected to cross $500 million during this fiscal,” the FIEO official said.