News24 Manthan 2023 LIVE: What did govt do for industry, investment in Chhattisgarh; Know here 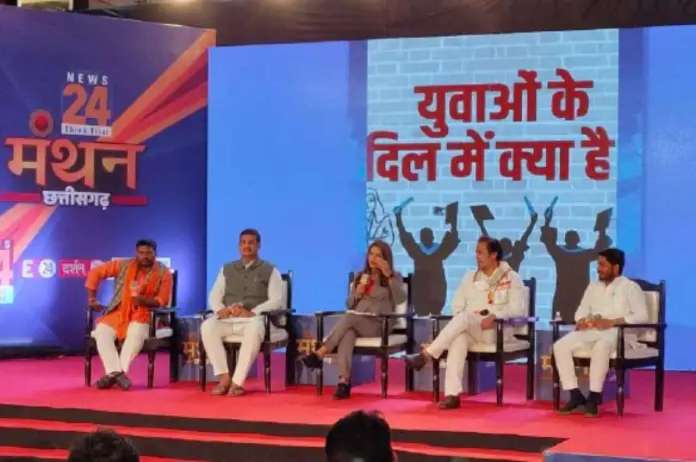 Raipur: News24’s most popular conclave, Manthan 2023, premiered on Tuesday in Chhattisgarh’s capital Raipur. The one-day programme will feature well-known leaders on the dais. The programme began with Ganesh Vandana lighting the lamp.

News24 Manthan 2023 LIVE Updates: The debate on electoral strategy has begun in the first session of Manthan between Congress State President Mohan Markam and former BJP minister Ram Vichar Netam. The show is moderated by Manak Gupta. In such a setting, numerous concerns about modern politics are being addressed in front of both leaders.

Question: Is it customary in Chhattisgarh to replace the government every five years? What is the present government thinking about this election in such a situation?

Mohan Markam, State President of the Congress, stated that in the elections of 2023-24, he will go among the public about policies and successes, and he will be successful in gaining the trust of the people of Chhattisgarh. We began electoral preparations two years ago. We have planned our strategy with the goal of winning all 90 seats in mind.

Former BJP minister Ram Vichar Netam responded to this issue by saying that the state is being robbed. The woodland is thinning. Land is being encroached upon illegally. Gambling establishments are being established. What can you say about the corruption situation?

Question: How did the BJP lose in the by-elections?

In response to this query, Ram Vichar’s leader stated that winning the by-election is not a metric. In the next elections, the public will hold up a mirror to the current government.

Will concerns such as reservation and OPS reverberate in Chhattisgarh? How are you preparing?

Ram Vichar remarked – The successes that the Congress is citing are our concerns. We will respond to this government’s act of deception. Who will be the CM’s public face? There is no shortage of faces in the BJP. PM Modi is the most visible face.

Who will be Congress’s CM face?

According to Mohan Markam, the high command will select who would be the CM. Our current Chief Minister is the same. Only the High Command’s decision will be binding. Chhattisgarh has combined power and organisation. It serves as a model for the entire country. ‘There is internal democracy in Congress. We express ourselves on the proper platform.’

What happened to TS Singh Deo? Will he run in the election?

He is a top leader, said Markam. He is with us and will fight for us in the elections. The high leadership will decide whether or not he will run in the elections. Rahul Gandhi will be here for the campaigning.

We want Markam ji to be the CM, but the situation is such that no leader is being listened to, according to Ram Vichar. Tribals receive little attention.

On becoming CM, Markam remarked – I am trying my best to execute the responsibility handed to me by the high command.

Youth leaders took part in Vipnesh Mathur’s Youth Politics. The session was attended by Congress youth leader Vikas Upadhyay, NSUI state president Neeraj Pandey, BJYM state president Ravi Bhagat, and young BJP leader Saurabh Singh. Youth activist Vikas Upadhyay stated – In these four years, the effort of linking more than 5 lakh youngsters with employment and self-employment has been done. More than 1.5 lakh crore individuals have received assistance from the government. The government is doing a lot for young people. As a result, they are receiving encouragement.

A fierce debate about English medium schools erupted among young leaders. Congress’s youth leaders stated that our administration has done an excellent job in terms of education. Youth have received employable education. According to BJP youth leaders, no teacher has been hired at a single school. Deputation teachers are being appointed. No English will be heard from the teachers.

In a debate between BJP and Congress leaders over young players, BJP leaders stated that the players are not being encouraged. More than a thousand crores have been swindled in the name of youth and sports. Our administration performed an excellent job in education, according to the Congress leader. The government not only expanded the number of seats, but also established new colleges. I did a lot of sports-related stuff for the athletes. Recruitment is taking on in all departments. According to the BJP spokesperson, the Congress’ programmes are designed to feed its politicians. This has not benefitted the kids.

Discussion on Chhattisgarh’s development in terms of investment and industry

Along with Sandeep Chaudhary, Cabinet Minister Mohammad Akbar, steel sector businessman Anil Nacharani, real estate sector Anand Singhania, and former FICCI Chhattisgarh president Pradeep Tandon are present at this session. Mohammad Akbar began the discourse by stating what Ajit Jogi ji had said about Chhattisgarh: impoverished people in a wealthy nation. We have a variety of deposits, including gold mines. Organic farming is thriving in Chhattisgarh. The administration is working hard in all of these areas. The government is doing a lot of things, such as purchasing cow poo. The Congress party bases its arguments on work.