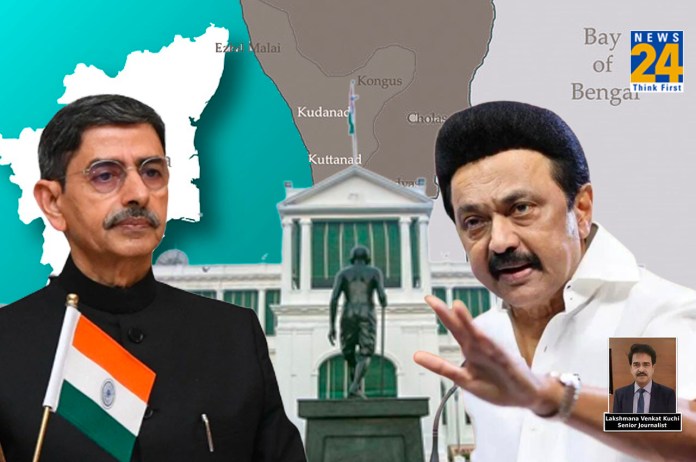 #GetOutRavi is trending on Twitter, and banners and buntings and posters asking Tamil Nadu governor to quit have come up all across the state on Tuesday, a day after he launched into an open fight against the MK Stalin led state government. As if the confrontation was not enough, Governor RN Ravi escalated the tiff with the government on Tuesday by sending out Pongal invites that carry his designation as governor of Tamizhagam.

Now, this fresh invite – though in Tamil – has infuriated state MLAs. This is because the latest Pongal invite from the governor used Tamizhaga Aalunar, instead of Tamil Nadu government and also omits the state government’s emblem. The invite carries only the government of India emblem. But, the English version of the invite uses the name Tamil Nadu governor.

Clearly the governor also appears in no mood to back down, but in Tamil Nadu he is facing a revolt from almost every section of the society. Students took to streets and began protests seeking the sacking of the governor, and in fact put up posters across the state. Activists of different political outfits, the smaller regional groupings, too jumped into the fray in what looks like an eruption of competitive protests.

In particular, Ravi’s comments that Tamil Nadu appears to be rejecting everything that rest of the nation wants and is applicable in whole of nation has got the common man also riled. As it is the DMK has managed to paint the governor as a stooge of the government and a person who was propagating the BJP RSS agenda. Now, in Tamil Nadu, the DMK has also successfully built a narrative against the “Hindi party -BJP” and now the confrontation between the two constitutional bodies has erupted in public outcry.

Through his actions, the governor may not have exactly helped the BJP though that could have been the intention, said a political observer. If not anything, his actions have let the DMK off the hook and gave it a chance to distract the attention of the people and mount and nurture a campaign on emotive issues.

Now, even the BJP in Tamil Nadu accuses the DMK of exactly this, that the DMK was making up this issue to hide its failures on governance and performance front. But, for a party trying to make inroads into Tamil Nadu, the BJP may well have been better off without such “help” from the governor that has seemingly given the DMK a handle to beat the governor, the central government and the BJP.

The latest Pongal invite barb, is an indication that the governor wants to escalate the confrontation that has not left him in any glory. A left leader posted Pongal invitations from Raj Bhavan from the previous year and the current one to highlight what he alleged was deliberate attempt to whip up controversy.

“The invitation from the Governor’s House to the Pongal ceremony last year said Governor of Tamil Nadu. Now the invitation for the Pongal festival says, Tamizhaga Governor. He should leave the state at the same speed as he left the House yesterday. He should be expelled,” the Left leader wrote.

Incidentally, the governor too used the social media to further his point of view and criticism of the ruling DMK. The governor criticised the DMK for addressing the central government as “Ondriya Arasu” in Tamil, which belittles the Union government.