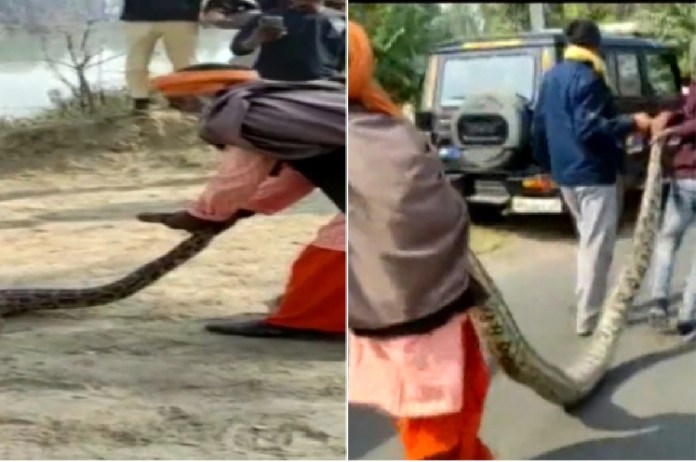 Aligarh: The video is getting viral on social media in which an old man has been seen holding a 12ft python with the help of two young men. The video is from a small village near Aligarh, Uttar Pradesh. While people around were busy making videos, two young men were seen helping that old man to take the python away from there safely. The python was found near the river in the village.

According to the news agency ANI, Divisional Director of Social Forestry Division, Aligarh, Diwakar Kumar Vashisht said that the python discovered in Aligarh’s Bajgarhi village is about 12 feet long and weighs 70-80 kg. It has been captured by the officials with the help of villagers and sent to the forest area.

#WATCH | A python discovered in Bajgarhi village of Aligarh is approx 12 feet in length & weighs between 70-80 kg. It was captured & sent to the forest area by our officers with the help of villagers: Diwakar Kumar Vashisht, Divisional Director, Social Forestry Division, Aligarh pic.twitter.com/kYYRp6nhct

Video gets viral on social media

In the video released by ANI, it can be seen that some people are holding a large python. A man dressed as a monk is holding the mouth of a snake and the other two are holding the snake from both sides.