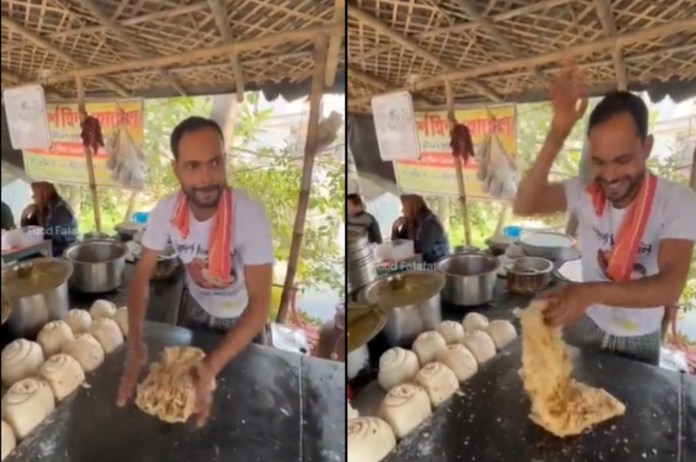 Kolkata: The video going viral on social media, shows a man from Kolkata, West Bengal, making ‘pitai’ paratha with a different kind of technique for breakfast. The clip shared on social media by IPS officer Supriya Sahu shows a man beating a paratha. In the video, he repeatedly hits it and makes it fluffier because we Indians love to have soft and fluffy paratha for breakfast. The flatbread made of maida is served in different varieties in diverse parts of the country.

In the clip, Indian Administrative Service officer Supriya Sahu quipped about the competition that the Kolkata interpretation is the best version of paratha. The flaky paratha is brutally thrashed several times, so the name ‘pitai’ or ‘being thrashed’ suits it well.

Netizens were stunned by how the man beat up the paratha and came up with funny reactions. A user commented, “World beater or word beater.” Another user wrote, “It’s knows as “Petai Paratha” in Bengal and is sold as per the weight. People also like adding a sweet syrup (white gravy) on top of it. It tastes delicious with chhole.” A third user commented, “Indeed – an unbeatable competition…”

Also read:- Viral Video: Who is this Dhinchak Pooja 2.0? Let’s find it out here