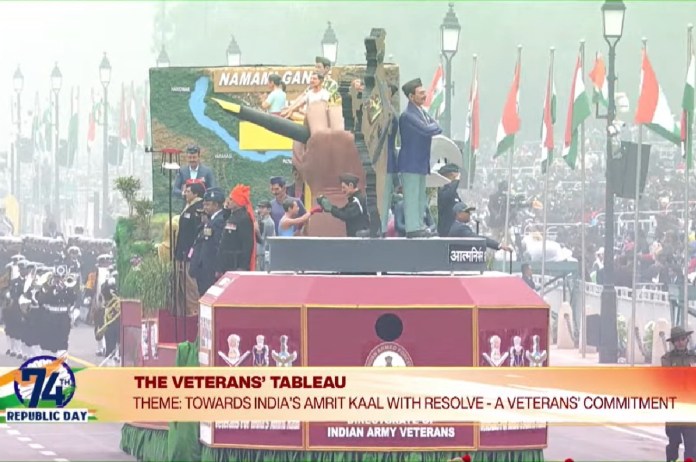 New Delhi: The Veterans tableau which was displayed on the Kartavya Path on the occasion of 74th Republic Day on Thursday, presented the theme of “Towards India’s Amrit Kaal with Resolve -a Veterans Commitment”, showing a mark of recognition of the endeavours by the Veterans in crafting the 75 Years of Independence.

The tableau is also a mark of their initiatives underway in shaping India’s destiny during the ‘Amrit Kaal’.

Based on the theme, ‘Towards India’s Amrit Kaal with Resolve – a Veterans Commitment’ tableau provides a glimpse of veterans’ contributions in the past 75 years with focus on their silent yet meaningful and mega-impact endeavours.

Veterans; who after enduring combat under the most challenging conditions remain relentless in the resolve of continued service to the nation. Thus, epitomising the indomitable spirit of the soldier.

The theme urges the citizens to commit in taking the nation to the zenith of overall development creating an environment that fosters unity, growth, a green environment, and harmony.

The theme illustrates how soldier citizens act as catalysts for motivating others in society for playing a constructive role in nation-building by being role models and pioneers in various projects.

Earlier, President Droupadi Murmu unfurled the Tricolour at the Kartavya Path in the national capital.

President of Egypt Abdel Fattah El-Sisi is the Chief Guest at this year’s parade.