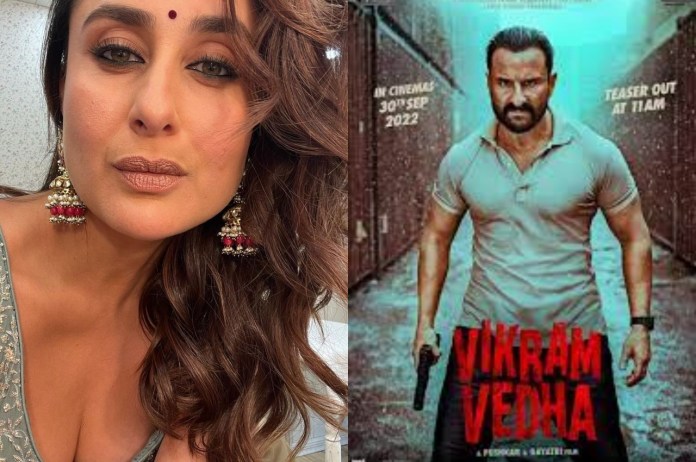 New Delhi: One of the most eagerly anticipated Bollywood movies, Vikram Vedha, which stars Hrithik Roshan, Saif Ali Khan, Rohit Saraf, and Radhika Apte, finally hits theatres on September 30, 2022, just in time for the Gandhi Jayanti holiday weekend. The movie is a remake of the same-named Tamil action thriller starring Vijay Sethupathi and R Madhavan. As the release date draws near, the buzz surrounding the movie is gradually growing. On September 26, a special screening of the movie was conducted, and prominent figures including Kareena Kapoor Khan were in attendance.

Kareena Kapoor Khan has  reviewed Vikram Vedha  and she absolutely loved the film. Her review read, “Best film, best actors, best directors. What a film. Blockbuster”. In her account, she also mentioned the movie’s actors and staff. The private screening was also attended by a few other press and media representatives. The teaser and trailer for Vikram Vedha have garnered positive reviews. Positive reviews have also been given to Alcoholia and Bande. The makers have systematically released all the assets of their film and the promotional activities are being carried out too. 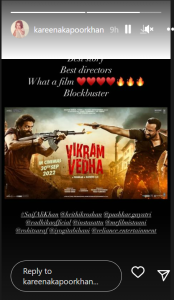 Kareena will next be seen in Sujoy Ghosh’s thriller, which is based on the Japanese book The Devotion of Suspect X, on the work front. She is making her OTT platform debut with this. She will also make her production debut with Hansal Mehta’s horror flick. Additionally, Kareena will work once more with Rhea Kapoor. Following Vikram Vedha, Saif Ali Khan will appear in Om Raut’s Adipurush, which also stars Prabhas and Kriti Sanon. The movie is slated for release on January 12.