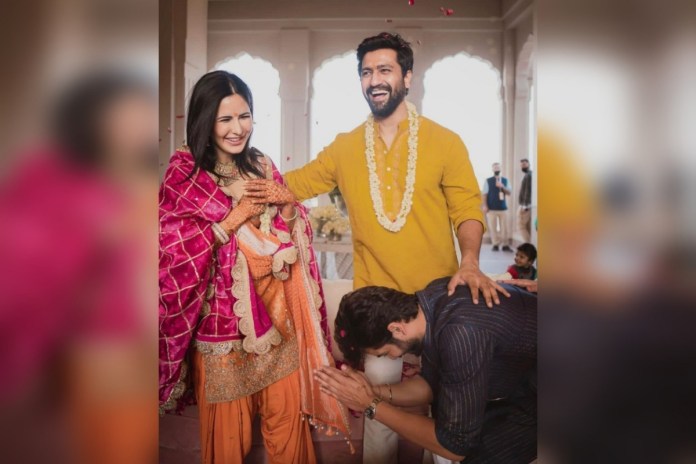 New Delhi: Sunny Kaushal, an actor and Vicky Kaushal’s younger brother, is celebrating his birthday today. Sunny’s sister-in-law Katrina Kaif, on the occasion, had a picture-perfect wish for him. Katrina dug out a picture from the archives to extend her best wishes to Sunny. The picture appears to be from hers and Vicky’ss wedding festivities that took place last year in Rajasthan.

Katrina Kaif and Vicky Kaushal tied the knot in December last year, after dating for 2 years. They hosted an intimate wedding in the presence of family members and very few friends from the film industry.

Katrina Kaif took to her Instagram space to wish brother-in-law Sunny Kaushal on his birthday. In the picture, Sunny can be seen touching Katrina’s feet as she and Vicky Kaushal grin from ear-to-ear. She captioned the post: “Jeete raho, khush raho (live long, be happy).”a look at the picture below:

Meanwhile, Vicky Kaushal took to Instagram to share an uber cool picture with his brother. Sharing the picture, he captioned, “Happy Birthday to the most sarv gunn sampann Kaushal! Love you.” The picture shared by Vicky also appears to be from his wedding shenanigans. Take a look below:

Sunny Kaushal made his acting debut with Sunshine Music Tours and Travels in 2016. He then established his acting career with a supporting role in Gold and ventured as the main lead in Bhangra Paa Le. His performance in romantic drama Shiddat was widely appreciated. Sunny made his OTT debut with Amazon Prime Video’s The Forgotten Army – Azaadi ke Liye. Up next, he will be seen in Netflix’s quirky comedy Chor Nikal Ke Bhaaga with Yami Gautam.