HomeEntertainmentShehnaaz Gill clears rumours of her exit from Salman Khan's next

New Delhi: Everyone is excited to see Shehnaaz Gill share the screen with superstar Salman Khan in the upcoming film Kabhi Eid Kabhi Diwali. Since the morning there are were reports that Shehnaaz is no more a part of the film and that she has also unfollowed the superstar on Instagram. There is no official announcement about Shehnaaz’s acting debut in the film.

Shehnaaz finally took to her Instagram stories and cleared up such rumours. The actress revealed that she is part of the film and cannot wait to see herself in the movie. She wrote, “LOL! these rumors are my daily dose of entertainment since last few weeks. I can’t wait for people to watch the film and ofcourse me too in the film.” 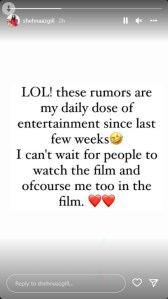 There are reports that in the movie, the actress will be seen romancing Jassie Gill and Salman will star opposite Pooja Hegde. Earlier in June, Shehnaaz was spotted with Raghav Juyal and Siddharth Nigam at Mumbai airport, if the rumours are correct then they will also be seen in the movie.

The action drama movie is directed by Farhad Samji and produced by Salman Khan Films and Nadiadwala Grandson Entertainment. According to reports, Salman’s son-in-law Ayush Sharma was also part of the film but had walked out at the last minute due to creative differences.

New Delhi: Mahindra & Mahindra has taken the wraps off its most popular SUV...