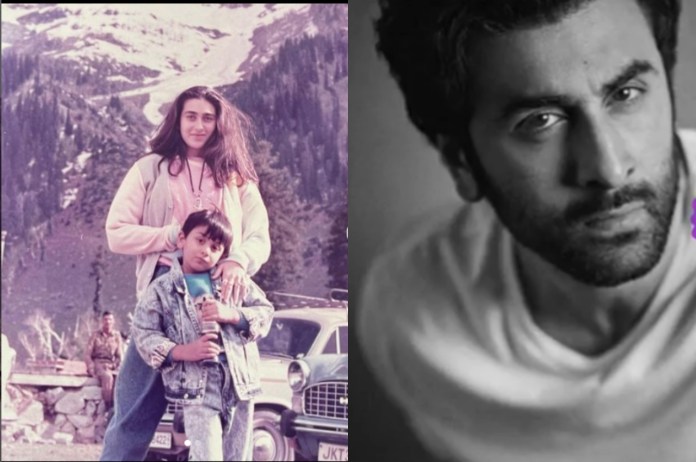 New Delhi: Karisma Kapoor is one doting sister to all the Kapoor siblings. On Ranbir Kapoor’s birthday, the actor shared a priceless picture from the archives. In her post, she also shared birthday wishes for her aunt Rima Jain. Other than Karisma, Neetu Kapoor and Kareena Kapoor also wished the duo on their social media platforms. For the uninformed, Ranbir is the son of late actor Rishi Kapoor and Neetu while Rima is his sister.

Karisma Kapoor took to her Instagram space to share an adorable wish for brother Ranbir and aunt Rima. To wish Ranbir, she shared a throwback picture.

A young Karisma was pictured standing in front of her with Ranbir. They were in front of a mountain, and Ranbir was making a face while Karisma grinned. Karisma went for loose-fitting denims and a pink blouse underneath a sweater. Under a denim jacket, jeans, and a blue T-shirt, Ranbir was dressed.

The other image showed a young Karisma sitting behind Rima as they both turned their heads away from the camera. It appears that the picture was taken at Rima’s wedding. Rima donned a white dress, while Karisma opted for a red and orange ensemble. Karisma captioned the post, “Two very special Kapoor’s were born today! One who’s soon to be a dad. And the other one who has the kindest heart. Happy Birthday Rima Aunty and Happy 40th Ranbir.” She also added the hashtag–family love.

Kareena shared a picture of Rima with her son Taimur Ali Khan on her Instagram Stories. In the photo, the duo looked at each other as they made faces. She wrote, “Happy birthday to one of my most favourite people. My Rima aunty @rimosky.” Sharing a monochrome picture of brother Ranbir, Kareena called him a living legend. 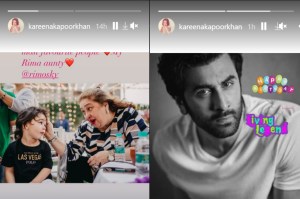 Neetu also wished Ranbir with a post on Instagram. She shared a picture featuring the duo and wrote, “This has been quite a milestone year for You for US !!! Miss your father as he would have been the happiest proudest I’m sure he is orchestrating from up there !!! Happy birthday love you the mostestttt rana. You are my Shakti Astra #bestfriend #strength.” Posting a selfie with Rima, Neetu wrote, “Happy Birthday Bhoks @rimosky more friend than family have an amazing year love you loads.” 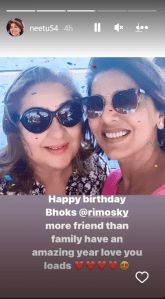