HomeEntertainmentVideo: Priyanka Chopra and Lilly Singh dance their heart out at Diljit...

Video: Priyanka Chopra and Lilly Singh dance their heart out at Diljit Singh’s concert in LA 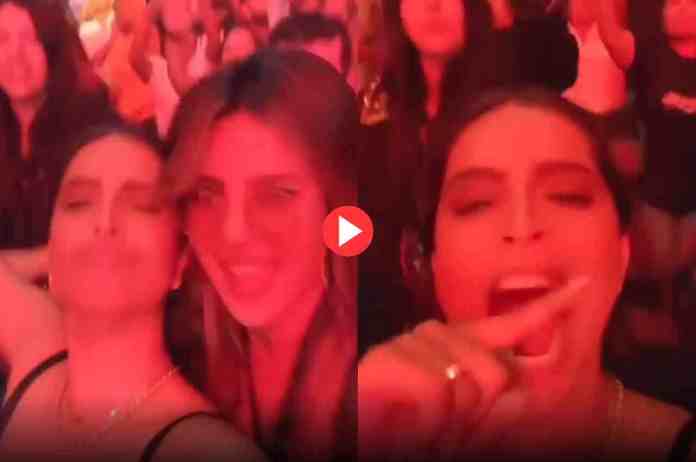 New Delhi: Priyanka Chopra is currently hanging out with her friend Lilly Singh at another concert after dancing to Kenny Chesney’s songs with Nick Jonas during the former’s Los Angeles performance. It’s Diljit Dosanjh this time. The YouTube sensation posted footage of Priyanka singing and dancing along to Diljit Dosanjh’s well-known songs on her Instagram Stories. Lilly first shared a video of herself singing along to Proper Patola in the vehicle with the comment, “Getting Ready.” Diljit sang live in her subsequent video, “Singing on Stage.”

“Oh, my boy. In the subsequent video, titled “Punjabiii. Tearing up LA,” Lilly and Priyanka join the mob.” Priyanka opted for a black crop top, a chic jacket, and tinted sunglasses for the event. Lilly also seemed gorgeous.

Priyanka Chopra , 40, and Lilly Singh, 33, have been friends for a long time. Lilly attended Priyanka’s wedding festivities in Jodhpur even though she appeared in one of her YouTube videos.

Last year, Lilly attended a grand Diwali party at Priyanka and Nick’s LA home. She shared pictures and wrote: “Last night was a movie. Love & Light with the Desi squad. . And then wild out with them. And then have senti talks with them. And then watch them WIN. I’m going to have to make this an annual thing.”

Meanwhile, on the work front, Priyank will next be seen in It’s All Coming Back To Me with Sam Heughan and Celine Dion. It will be a Valentine’s Day 2023 release. The actor also has Text For You and Ending Things. On the Bollywood front, she will next be seen in Jee Le Zaraa with Katrina Kaif and Alia Bhatt.