Bollywood actor Neetu Kapoor was recently spotted at a special screening of Brahmastra, she shared her honest views with Ayan Mukerji. 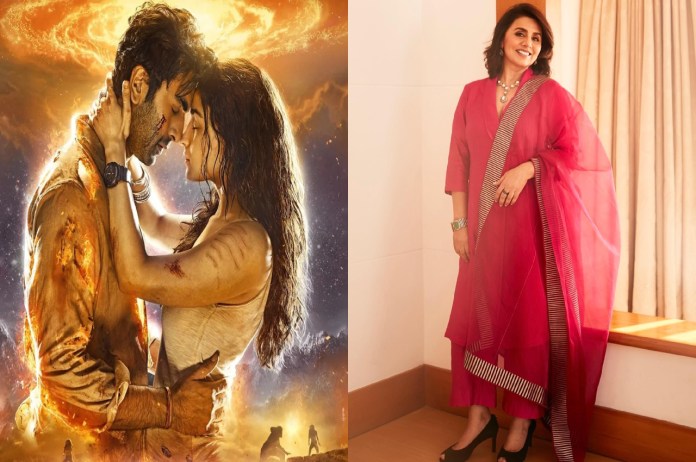 New Delhi: Bollywood actor Neetu Kapoor was recently spotted at a special screening of Brahmastra, starring her son Ranbir Kapoor and daughter-in-law Alia Bhatt. A video has been getting viral on social media, in which Neetu can be seen praising the film.

The video is shared by a paparazzo account, titled VarinderChawla. In the clip, Neetu was heard telling the director of the film Ayan, “The ending is gripping and outstanding but initially… it takes time (to build). But once the film takes off…” Ayan was seen patiently listening to her reviews through the video.

In the clip, Karan Johar was also seen standing nearby. Many Bollywood celebs including Ranbir Kapoor, Alia Bhatt, Ayan Mukerji, Shaheen Bhatt, and filmmaker Mahesh Bhatt, Shanaya Kapoor, Randeep Hooda, and others attended the special screening of Brahmastra in Mumbai.

The film is now screening at theatres and received positive reviews on Twitter. A fan wrote, “The #AyanMukerji directorial #Brahmastra has created landmark moments in Indian cinema. It manages to bring you into a different world through its MAGNIFICENT VISUALS.The plot engages you right from the get go to surprising climax”

Another user wrote, “Good…#RanbirKapoor & #AliaBhatt Were Good With A Terrific Chemistry…Supporting Cast were apt & terrific…BGM…Cinematography & VFX Works…Story is Decent & Screenplay Is Racy”. 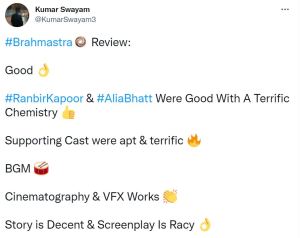 The film has an exceptional opening collection in the range of Rs 35-36 crore, the film has recorded Ranbir’s highest opening day figure, defeating the first-day collection of Sanju, which opened with Rs 34.75 crores.