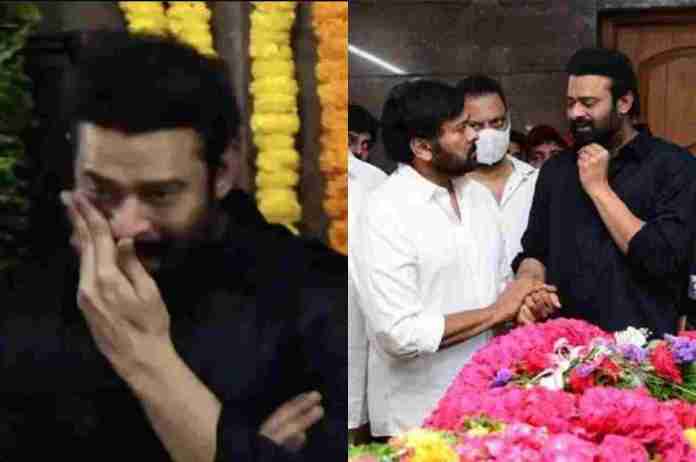 New Delhi: Krishnam Raju, a veteran actor and politician, passed away on Sunday morning at the age of 82. In videos and images posted from the late actor’s home, his nephew and actor Prabhas appeared to be visibly shaken by his uncle’s death. Pictures and videos posted from there show Prabhas crying. The Telugu film industry’s actors and directors flocked to the actor’s home to express their condolences.

In a video from the funeral that a fan club posted, Prabhas can be getting teary-eyed. Industry insiders and fans have posted a few images of Prabhas comforting his family. Another image shows veteran actor Chiranjeevi, who collaborated with Krishnam Raju, comforting Prabhas and holding his hand as the latter struggles to contain his tears.

Krishnam Raju passed away in a hospital in Hyderabad on Sunday morning. According to a PTI report, he had post-Covid-19 illnesses. He was referred to as the Rebel Star. In the 1970s and 1980s, he appeared in a number of popular movies, including Krishnaveni, Sati Savitri, Rangoon Rowdy, Dharmaatmudu, and Antima Theerpu. Between 1998 and 2004, he was elected to the Lok Sabha twice after joining the Bharatiya Janata Party. In the Atal Bihari Vajpayee administration, he served as a Union Minister.

Earlier, Prime Minister Narendra Modi condoled Krishnam Raju’s demise on Twitter. He also posted a throwback photo with the late veteran actor and Prabhas and wrote, “Saddened  by the passing away of Shri UV Krishnam Raju Garu. The coming generations will remember his cinematic brilliance and creativity. He was also at the forefront of community service and made a mark as a political leader. Condolences to his family and admirers. Om Shanti (sic).”