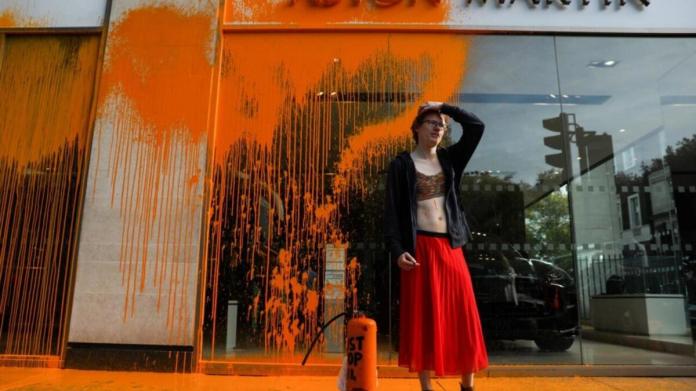 London: Climate activists in London are splashing orange paint at Britain’s landmark buildings to register their protest against fossil fuels. The protestors sprayed paint on The Home Office, the MI5 building, the Bank of England, and the headquarters of News Corp at London Bridge.

On Monday, six ‘Just Stop Oil’ supporters sprayed orange paint on the four buildings. The video shared by the group showed the activists spraying orange paint from a fire extinguisher.

The Just Stop Oil group, which wants an end to new North Sea oil and gas exploration, said the buildings were chosen “to represent the pillars that support and maintain the power of the fossil fuel economy — government, security, finance and media”.

“We are not prepared to stand by and watch while everything we love is destroyed, while vulnerable people go hungry and fossil fuel companies and the rich profit from our misery. The era of fossil fuels should be long gone, but the creeping tentacles of fossil fuel interests continue to corrupt our politics, government and media as they have for decades,” a Just Stop Oil spokesperson said.

🧯 At 8:30am today, 6 Just Stop Oil supporters sprayed orange paint from fire extinguishers onto the Home Office, the MI5 building, the Bank of England and the headquarters of News Corp at London Bridge.

The spokesperson questioned, “How else do you explain a government ignoring sensible no-brainer policies like renewables, insulation and public transport, which would cut our energy bills and our carbon emissions, in favour of corrupt schemes to drill for uneconomic oil and gas at taxpayers’ expense?”

According to an AFP report, Just Stop Oil has over the last month mounted almost daily protests in opposition to the government’s plans to licence more than 100 new oil and gas projects by 2025.

Action has included smearing chocolate cake on a waxwork figure of King Charles III at the Madame Tussauds museum and throwing tomato soup at Vincent van Gogh’s “Sunflowers” at the National Gallery.

The group said 637 protesters had been arrested over the last four weeks and more than 1,900 since April, the report said.

Four were held after paint was sprayed on the interior ministry, the headquarters of the domestic intelligence agency MI5 and a subsidiary of Rupert Murdoch’s US media conglomerate News Corp, the Metropolitan Police said, reports AFP.

Officers from the City of London force arrested two others following a similar protest at the Bank of England in the capital’s financial district.