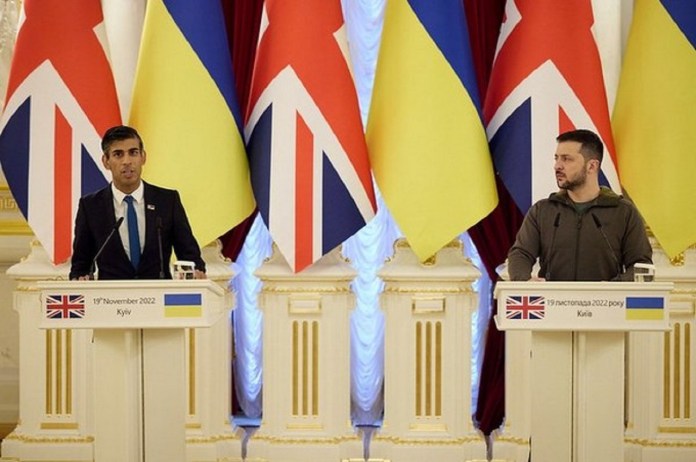 Kyiv: British Prime Minister Rishi Sunak on Saturday made his first visit to the Ukrainian capital Kyiv and pledged to bolster the UK’s support in the country’s ongoing conflict with Russia.

Britain knows what it means to fight for freedom.

We are with you all the way @ZelenskyyUa 🇺🇦🇬🇧

In a statement, the UK PM’s office noted that the announcement follows more than 1,000 new anti-air missiles announced by the Defence Secretary earlier this month.

“It is deeply humbling to be in Kyiv today and to have the opportunity to meet those who are doing so much, and paying so high a price, to defend the principles of sovereignty and democracy,” said Sunak.

“I am proud of how the UK stood with Ukraine from the very beginning. And I am here today to say the UK and our allies will continue to stand with Ukraine, as it fights to end this barbarous war and deliver a just peace,” he said.

“While Ukraine’s armed forces succeed in pushing back Russian forces on the ground, civilians are being brutally bombarded from the air. We are today providing new air defence, including anti-aircraft guns, radar and anti-drone equipment, and stepping up humanitarian support for the cold, hard winter ahead,” he added.

The UK is also bolstering our training offer to Ukrainian’s armed forces, sending expert army medics and engineers to the region to offer specialised support, the statement said.

Downing Street said the team of emergency responders described their harrowing work rescuing survivors from the rubble and fighting fires in the aftermath of Russian airstrikes and mortar attacks.

Sunak also saw captured Iranian-made drones which have been used to target and bomb civilians in recent months.

With difficult winter months ahead of widespread blackouts of destruction of homes, schools and hospitals, Downing Street said the Prime Minister has also confirmed GBP 12 million for the World Food Programme’s response, as well as GBP 4 million for the International Organisation for Migration.

The UK government says it has identified an initial eight construction projects to be supported by UK Export Finance, helping to repair Ukraine’s critical infrastructure and lay the foundations for economic recovery.

The projects include six bridges and two housing projects, including a development in Bucha for some 2,250 residents.