HomeWorldPakistan on verge of another wave of floods, more deaths as toll...

Pakistan on verge of another wave of floods, more deaths as toll crosses 1,500

Pakistan is at risk of more floods and additional fatalities following extremely strong torrential rain brought on by climate change that inundated a third of the nation and left more than 1,500 people dead. 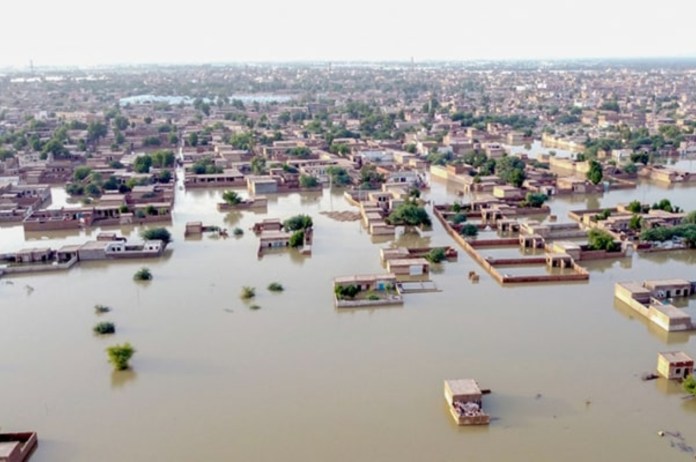 New Delhi: Pakistan is at risk of more floods and additional fatalities following extremely strong torrential rain brought on by climate change that inundated a third of the nation and left more than 1,500 people dead.

Authorities are concerned that heavy rains in parts of neighbouring India will flood important rivers in Pakistan despite the fact that waters have started to recede in some areas. In order to prevent further loss of life and property, the Provincial Disaster Management Authority has advised that residents in specific Pakistani regions be evacuated.

According to data posted on the Pakistan Meteorological Department’s website on Saturday, the rivers have not yet seen a rise in water levels.

The climatic calamity in the South Asian country has costed $30 billion in damages and displaced 33 million people, which is more than Australia’s whole population. The country is already struggling with low currency reserves and the highest inflation in decades. Following assistance from the International Monetary Fund, the nation recently averted a default. While the rupee is close to a record low, bonds have reached their lowest level since mid-July.

According to Abdul Kadir Hussain, head of fixed income asset management at Dubai-based Arqaam Capital Ltd., “the economic impact of the floods is a big cause of concern for global investors.” Additionally, he said that the promised dollar inflows that were meant to follow the IMF financing have not materialised. In addition, Hussain noted that the nation’s political unrest has not abated.

The political climate is still tense at a time when the nation is working hard to help millions of flood victims. Imran Khan, a former prime minister, said that the government was delaying elections until a new army leader was named, and as a result, the army issued a rare public rebuke to him. Khan, who was ousted in April and is advocating for early elections, is also dealing with a number of legal issues that might spark unrest on the streets.

On Saturday, September 10, 2022, a woman in Pakistan’s Sindh province holds a pot filled with drinking water. Floods brought on by heavy rains have wreaked havoc, flooding a third of Pakistan, forcing more than 500,000 people to flee their homes, and destroying cash crops and communication infrastructure.

The catastrophe continues to dominate. According to scientists, peak rainfall in Pakistan’s Balochistan and Sindh regions was 75% more severe due to climate change than it would have been in a world without warming. According to World Weather Attribution, a scientific organisation that investigates the connection between extreme weather events and climate change, the floods was made worse by an earlier this year heat wave in Pakistan and India that was also caused by climate change.

Monsoon rains are expected in some areas of Gujarat, Maharashtra, Madhya Pradesh, and Jammu and Kashmir through Tuesday, according to India’s weather office. Nevertheless, Pakistan’s general position is becoming better. According to the office of Prime Minister Shehbaz Sharif, certain districts should be free of floods in two to three weeks, but in other areas it could take up to three months.