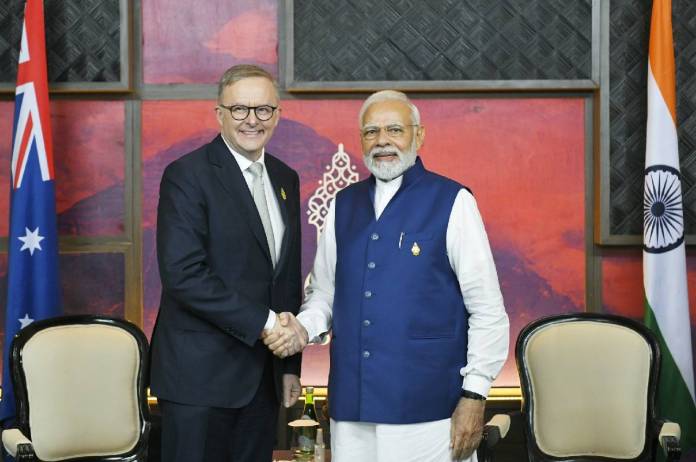 The Indian Prime Minister and Australian PM Anthony Albanese reviewed the progress made in deepening cooperation across a diverse range of sectors as well as regional and global issues of mutual interest, informed the Prime Minister’s Office (PMO).

Glad to meet PM Albanese. Discussed ways to further cement the 🇮🇳 🇦🇺 Comprehensive Strategic Partnership, with a focus on cooperation in education, innovation and other sectors. We also talked about increasing trade and maritime cooperation. @AlboMP pic.twitter.com/p216micRek

Earlier in the day, the Indian PM also met President of the Council of Ministers of the Italian Republic, Giorgia Meloni, President of the Republic of France Emmanuel Macron, Chancellor of the Federal Republic of Germany Mr. Olaf Scholz and Prime Minister of United Kingdom Rishi Sunak.

It should be noted that PM Modi’s “today’s era isn’t of war” message to Russian president Vladimir Putin in the backdrop of the Ukraine-Russia conflict has become part of the outcome statement of the G20 joint declaration at Bali in Indonesia.

Modi, in his statement to Putin in a bilateral meeting on the sidelines of the Shanghai Cooperation Organisation summit in Samarkand in September this year in the backdrop of the Ukraine-Russian conflict had said, “today’s era not of war”.

“It is essential to uphold international law and the multilateral system that safeguards peace and stability. This includes defending the Purposes and Principles enshrined in the Charter of the United Nations and adhering to international humanitarian law, including the protection of civilians and infrastructure in armed conflicts,” according to the G20 joint declaration adopted on Wednesday.

The statement added, “The use or threat of use of nuclear weapons is inadmissible The peaceful resolution of conflicts, and efforts to address crises, as well as diplomacy and dialogue are vital. Today’s era must not be of war.”

During a special briefing, Foreign Secretary Vinay Kwatra said, “PM Modi‘s message that “era not of war” resonated very deeply across all delegations and helped bridge the gap across different parties.”

Kwatra said, “India played a key role in the successful negotiations of the outcome document.”