Samosa Singh: The science and art of selling samosas 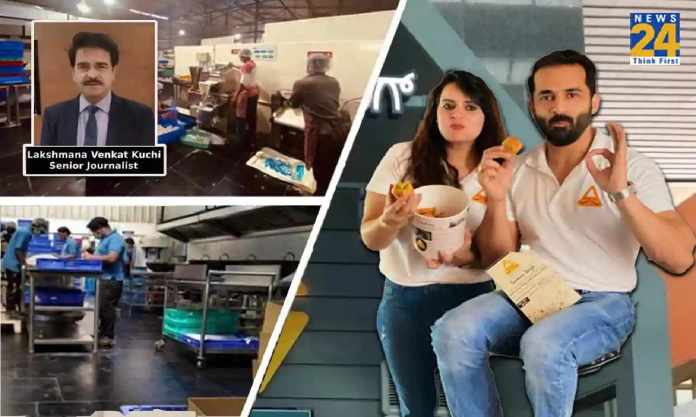 As India marches on towards industrialisation 4.0, is it any surprising that even the hand-made common pan-Indian snack of Samosa has gone into machine-mode manufacture. Elevating the stature and status of the roadside and commonplace snack dish to a fashionable, upmarket, tastier, and healthy snack are Shikhar Veer Singh and his wife Nidhi Singh, both scientists who kicked up their lucrative and high-paying corporate careers to “make Samosas the rest of their lives.”

SV applied scientific principles and his research findings in the making of samosas — from ingredients that went into its making, preparing the dough, and mechanising the process for standardisation. And thus, was born Samosa Singh seven years ago.

Started in 2016, the idea behind Samosa Singh was to have a scaled-up Samosa business, one that would offer the best quality, healthy and tasty snack that is a truly pan-India phenomenon.

The most honorable foursome in the lives of the couple – their in-laws – were naturally aghast that they had quit high-paying job of over Rs 1.5 lakh per month “to fry Samosas like a halwai.”

“We broke this news to our families when we knew that our decision is certain, and SV had already quit the job of the principal scientist. They initially were stunned; however, they also knew that we are sure of making this big and certain of our step. So, after initial suggestions, subtle cautioning—they give it in too—into our dreams of nurturing Samosa Singh!” said Nidhi in conversation with News24.

Hailing from service and defense background families—it was little stifling for their parents and elders to accept the fact that Nidhi and SV were leaving successful and settled career to pursue something around such a simple, non-fancy product. “We even received recommendation from our families to pick up a fancy product line like cheesecake etc.,” Nidhi said.

But SV and Nidhi, also a scientist engaged in a high-paying marketing role with a foreign company, stuck to Samosa and managed to think up a process to “manufacture” Samosas with a twist – concentrating on cleanliness, neatness, standardisation of size, shape, and taste.

“SV was serious. He designed and got a machine fabricated to roll out Samosas, complete with the filling. The idea was to eliminate human intervention to the maximum in the making of the Samosas,” said Nidhi.

“Our automation is completely done in-house through us and using budding CAD engineers–so we generally avoid pictures due to its proprietary nature. However, to answer your questions– the automation is to ensure consistency in the samosas like dough making, rolling, sheeting etc. so that every samosa has fixed thickness and filling quantity,” SV said and added, “we will soon have the capability to roll out up to 1 lakh samosas a day.”

“We sold off our house and put all our savings into the venture. At a rough count, we have invested some 1.5 crore into our dream,” said SV.

Today, the duo employs some 25 people in the corporate office – that tracks all its operations from the headquarters. Now Samosa Singh has some 80 outlets in several cities and has plans to take this figure past 100 shortly.

Lots of hits and misses, trials later the Haryanvi scientist couple managed to get the right product out – and had a ready-made corporate clientele in the country’s IT capital of Bengaluru.

And then Covid struck.

Business was down, but the determined couple was not. In addition to continuous research, adding more snack items, over the past couple of years Samosa Singh has become a brand of snacks that is growing popular across cities. Today, the brand offers a wide range of snacks — – aaloo tikki to paapri chaat to kulche chole to an offering of desserts.

“At the opening of our first outlet—our parents would stand outside—asking the people passing by the street to step inside our small quaint outlet and taste the samosas—it was a full day task where they would stand outside and get us the customers. Anyone who would just pass by without stopping—would upset them—those were our first few days!” Nidhi said recalling their early days of struggle.

Throughout the initial months—we would personally man the counter and fry the samosas when the orders would come. We would interact personally and take recommendations from the customers on the samosas variants they want to try out, she said.

“We would sometimes even arrange small competitions on the recipes for samosa and chai and award the most delicious one with the permanent inclusion in our menu. Some of these variants are kaccha aam ka samosa (seasonal variant), kadai paneer samosa, saunf ki chai etc.,” said Nidhi the marketing person.

In between the duo, SV has taken up the role of the principal scientist and the mechanic, looking for the factory, machines and processes, Nidhi is the brain behind the branding and marketing campaigns and the one who drives sales.

All the scientific research into the making of the best Samosas and concocting different varieties of this snack proved worth the effort – today their brand Samosa Singh, is sold from 80 locations in Bangalore, Hyderabad, Vijayawada, Vizag, Nashik, Mysore, Chennai, Mumbai, and Pune, is the fastest growing Indian fresh snacking cloud kitchen brand.

What started as a two-member ‘factory’ making Samosas has grown into a team of 180 youngsters today.

“Interacting with our customers and incorporating their suggestions is still the core of our business principles. We have recently launched certain special samosa categories like Jain samosas, Chettinadu flavour samosa versions for our Maharashtra and Tamil Nadu samosa lovers!” Nidhi said, adding that growing a business was satisfying, but more satisfying for herself and her husband was the smile they brought on the faces of the customers.