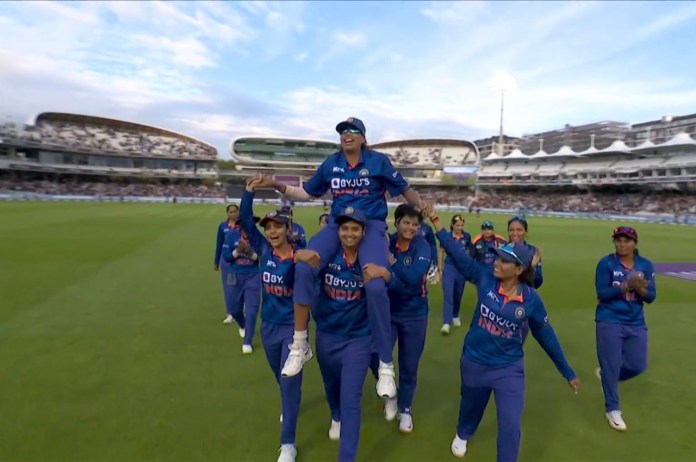 New Delhi: Jhulan Goswami bid farewell to international cricket in the third ODI between India and England played at Lord’s. She was given the Guard of Honor at Lord’s. Jhulan bowled brilliantly in his last match as well. He took 2 wickets for just 30 runs in 10 overs. He also bowled three maiden overs. Jhulan bowled Alice Capsi for 5 and Kat Cross for 10 and showed the way to the pavilion.

Jhulan has become the highest wicket-taker in international cricket. Jhulan, who started her career at the age of just 19, has registered a total of 355 wickets in her name. At number two is England bowler Katherine Brunt, who has 329 wickets to her name. Australian bowler Ellyse Perry has taken 313 wickets and South African bowler Shabnim Ismail has taken 309 wickets.

Jhulan created history in India’s nine-wicket win over Sri Lanka on 11 September 2018. Jhulan then became the first bowler in women’s cricket to take 300 international wickets. Jhulan has recorded 255 wickets in ODI cricket. with no one around. No bowler has so far taken 200 wickets in ODIs. Shabnim Ismail has taken 191 wickets.

The emotional moments of the last match

Jhulan’s last match was very emotional. While embracing him, Captain Harmanpreet Kaur burst into tears. The teams of India and England bid him farewell with respect.

What a farewell match ! India wins the thriller . Thank you #JhulanGoswami for all the lovely memories on the fields . pic.twitter.com/IuWh8ks7vJ

These figures of Jhulan Goswami will surprise you