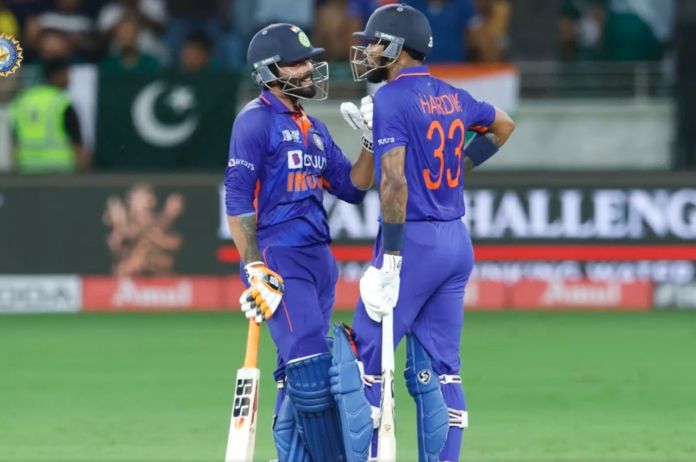 Dubai: India marked a spectacular win against arch-rivals Pakistan on Sunday after overcoming difficult situations in Dubai. Choosing to bowl first, India had dismantled Pakistan’s line-up for 147 runs. While chasing the score, everyone contributed and took the team towards the win.

BCCI Chief Sourav Ganguly lauded the performance of Indian Team and said that they showed a lot of composure.

While writing on Twitter, Ganguly wrote, “Good result for India to start off..lot of composure in a tight situation…@bcci @ImRo45.”

Good result for india to start off..lot of composure in a tight situation ..@bcci @ImRo45

Hardik Pandya was the highest scorer for India and Man of the Match played a match-winning knock against Pakistan. It was the same opponent in 2018 when Pandya had gotten injured and had to miss out on cricket.

After the game, Hardik Pandya was seen in conversation with Ravindra Jadeja where he talked about his time and struggle from that period till now and how he has overcome that.

Also Read :- Asia Cup 2022: First controversy, Why is Pathum Nissanka given out?

“I was remembering it all. I was stretchered off at the same venue against the same opponent in the 2018 Asia Cup. You feel a sense of achievement because the things that have happened in the past, today I got an opportunity. The journey is beautiful. The fruits of our journey come to us, but behind the scenes, a lot of people do not get credit who walk along with us,” he said.