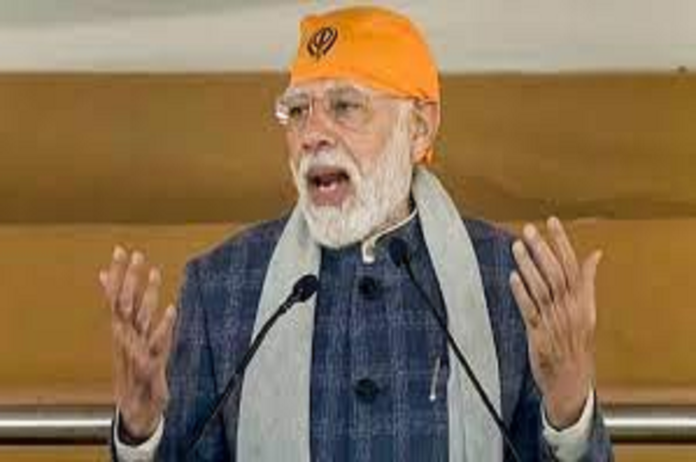 Veer Bal Diwas: Prime Minister Narendra Modi on Monday participated in a ceremony which is held to commemorate the “Veer Bal Diwas” at Major Dhyan Chand Stadium in the nation’s capital.

The event is being held in honour of Mata Gujri Ji, the fourth Sikh Guru, Guru Gobind Singh, and his four sons (Sahibzade). PM Modi attended the about 300 Baal Kirtanis’ “Shabad Kirtan.”

A march-past by some 3,000 kids will later be started by PM Modi in Delhi, according to an official statement from the PM’s office.

On January 9, 2022, the day of Sri Guru Gobind Singh Ji’s Prakash Purab, Prime Minister Modi said that December 26 will be observed as “Veer Baal Diwas” in honour of the bravery of the “Sahibzades,” the four sons of the last Sikh guru.

Although all four of Guru Gobind Singh Ji’s sons were killed, this day is remembered as the martyrdom of the Sahibzadas, Zorawar Singh and Fateh Singh, who are said to have been killed by Mughal troops in Sirhind (Punjab) when they were only six and nine years old on the orders of the ruling Aurangzeb.

The current Fatehgarh Sahib is the location where the sons of the last Sikh Guru were buried alive.

PM Modi stated on Twitter earlier in the day, “On Veer Baal Diwas, we remember the bravery of Mata Gujri Ji and the Sahibzade. We also recall Sri Guru Gobind Singh Ji’s bravery. Today at 12:30 PM, I’ll be participating in a programme to recognise this motivational day.”

On the occasion of Veer Baal Diwas, Prime Minister Narendra Modi remarked on Sunday that he was honoured to have attended a Sahibzadas-focused event in the nation’s capital.

PM Modi remarked during his final Mann Ki Baat of the year 2022, the 96th edition, “Tomorrow, on December 26, is the Veer Baal Diwas and I shall have the honour to attend a celebration in New Delhi devoted to the Sahibzadas.”