In this offline & online event that concluded Saturday, some 10,000 students from across the country got a chance to participate. 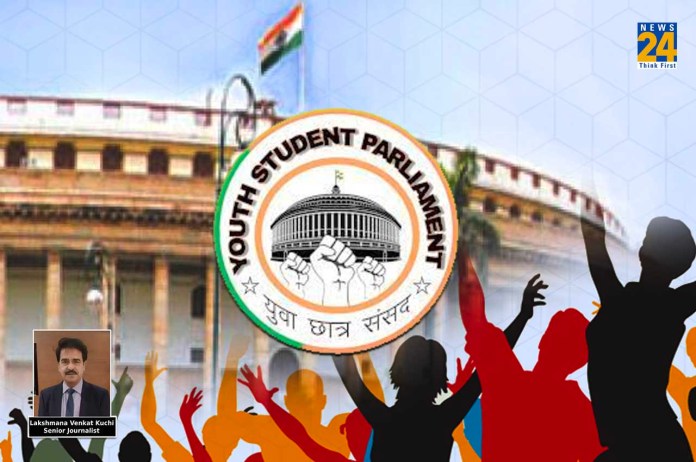 Politicians of all hues came together at a three-day students’ congregation – Bharatiya Chhatra Sansad (BCS) – held over the last weekend at MIT School of Governance in Pune – to give the youth a preview of how the parliamentarians work and what it entails to be in active public service via politics.

In this offline & online event that concluded Saturday, some 10,000 students from across the country got a chance to participate in the deliberations featuring the stars of Indian parliamentary democracy – from ruling party leaders to opposition leaders to the men and women who conducted the parliament – former Lok Sabha speakers from different dispensations.

An annual national conclave, the event on democracy and representative politics also witnessed a searing debate on media, and social media – on the theme whether media was ruled by noise, or law. Present to liven up the proceedings were Manish Tiwari, Congress MP and party spokesperson, Mrs Irom Sharmila, civil rights activist and Iron Lady of Manipur and Hema Sardesai, social activist and singer and Aprameya Radhakrishnan,CEO and founder Koo.

Conceptualised and initiative by Rahul V Karad, Managing Trustee and Executive President MAEER’s MIT and Chief Initiator, MIT School of Government, the 12th edition of the Bharatiya Chhatra Parishad aims to motivate and inspire students to become more aware of their surroundings and the society at large. The objective of the event was to inculcate among students the need to use communication plaforms wisely for propagating issues and agenda that led to betterment of society.

In this connection, the students were also exposed to issues dominating the minds of the masses like the Uniform civil code – elaborated by Chandrakant Dada Patil, Honourable minister for higher and technical education, Govt. of Maharashtra.  “Uniform civil code should promote the fundamental rights of women across all religions, castes and classes of society. It should give an equal rights to inheritance, decision in marriage, divorce, adoption etc. This will bring the required economic and social change in the society and ameliorate the situations of women in India,” the minister said.

In a virtual address, Governor of Maharashtra  emphasised that today’s youth should achieve great heights in modern science and spiritual knowledge. He said that “We cannot keep politics separate from us. Programs like the Indian Student Parliament will act as a guide for the youth”.

Dr. Meira Kumar, former Lok Sabha speaker and union minister spoke about  issues that today’s society face. She talked about the accomplishments that the country has achieved since the Independence. Mr Girish Mahajan, Mahaashtra Minister of sports and youth welfare, Medical education, Rural development, Panchayati raj shared his experiences as a student leader and stressed the importance of students joining the politics.

Speaker of Lok Sabha, Shri Om Birla has also commended and acknowledged the event, and expressed his joy over the initiative via a letter.

Mr Phadnavis visualised the significant contribution of the youth nation building and lauded how Digital Bharat is being used to propel India towards 5 Trillion Economy. He said “For our country, Sabka Saath – Sabka Vikaas, Sabka vishwaas aur Sabka Prayaas must become our motto. But the most important for you students is Sabka Prayaas, the ability and absolute necessity of trying.”

He said he believed that education is an important factor that directly affects democracy. “Hence, we must focus to develop a new and improved education system which allows the students and teachers to understand the real aim of education,” Karad added.