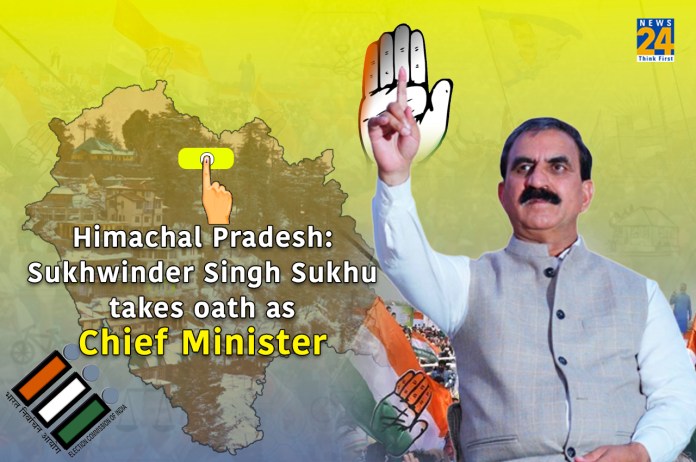 New Delhi: Congress leader Sukhwinder Singh Sukhu on Sunday took oath as the Chief Minister of Himachal Pradesh in the presence of party chief Mallikarjun Kharge at Ridge in Shimla.

Among the Congress’ top brass, senior leader Priyanka Gandhi Vadra was also there in the oath-taking ceremony. Vadra presence was significant as she was the top campaigner for the Congress’ victory in Himachal Pradesh.

While Congress MP Rahul Gandhi was busy carrying out the ‘Bharat Jodo Yatra’ to revive the party’s existence across the nation, Vadra was holding back-to back rallies in the hill state, making promises to bring back Old Pension Scheme which was scrapped by the previous governement.

After a brief deliberation over the new Chief Minister, the Congress party officially announced the name of Sukhu on Saturday. However, among many names, there was Congress’s Himachal Pradesh chief Pratibha Singh.

Pratibha is the wife of Virbhadra Singh who was Congress’ tallest leader until last year when he died. On being asked if she would attend the ceremony or not, Pratibha cleared that she cannot miss it when the CM has invited himself.

Pratibha Singh is also a Congress chief in Himachal Pradesh unit and a Member of Parliament from Mandi Loksabha Constituency.

Pratibha Singh said, “Why won’t I attend his oath-taking ceremony? Of course, I will go. It is my prime duty to be there with him as he takes oath as CM today.”

In a people’s mandate on December 8, the Congress had won a majority in the state Assembly, forming a government in the hill state.

With this, the Congress has ended the rule of Bharatiya Janata Party (BJP) in the state. According to the information, CPL leader Mukesh Agnihotri will be the deputy CM.

The Leader of Opposition (LoP) in the Himachal Pradesh Assembly, Mukesh Agnihotri will take oath as the Deputy Chief Minister of the hill state.

Who is Sukhwinder Singh Sukhu?

Sukhwinder Singh Sukhu is the President of the Himachal Pradesh Congress Committee. He defeated BJP candidate Vijay Kumar by more than 3,300 votes in a tough fight from Nadaun assembly seat in Hamirpur district. He has been elected MLA for the fourth time in Himachal.

Sukhu started his political career while studying at Government College, Shimla. He has done his post graduation and LLB from Himachal Pradesh University. He has also been the General Secretary and President of the College Students Union.

Sukhwinder Singh Sukhu was also the president of the NSUI, the student union wing of the Congress, for six years (1989-1995). He has also been the President of Youth Congress. In 2013, he was also made the Chief of Himachal Congress. Besides 2022, he has been elected as MLA from Nadaun assembly in 2003, 2007 and 2017. He had to face defeat in the 2012 assembly elections.