While protesters were demonstrating against unemployment and rising prices today, Priyanka Gandhi Vadra and other Congress officials were detained by police and dragged into police vehicles. 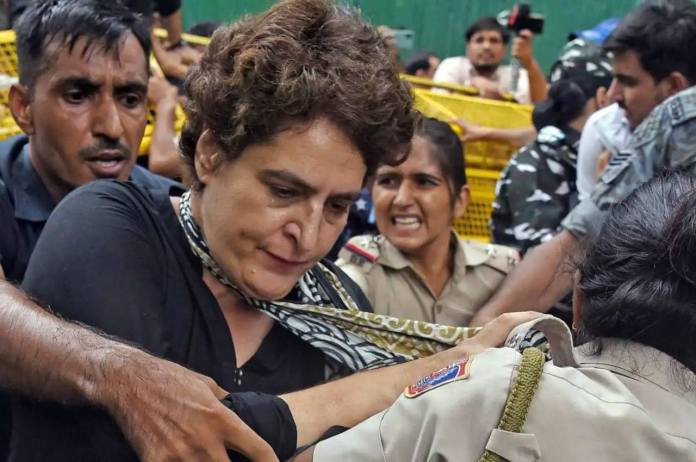 New Delhi: While protesters were demonstrating against unemployment and rising prices today, Priyanka Gandhi Vadra and other Congress officials were detained by police and dragged into police vehicles.

Priyanka Gandhi had scaled barricades to get to the location while wearing all-black attire like other party officials as a sign of protest. She staged a brief sit-in until the police removed her. Invoking law and order, the police had refused to grant permission for the protest.

A short while before she was detained, Rahul Gandhi, a Congressman, was also taken into custody. The Kingsway Camp in GTB Nagar’s hall was the only place the leaders could gather.

#WATCH | They (BJP) think Opposition can be muzzled. As their ministers can’t see inflation, we want to show them inflation by marching towards PM house…PM Modi has handed over the assets of country to his friends:Congress General Secretary Priyanka Gandhi Vadra

In a video tweeted by the party — apparently while going towards the party office — Priyanka Gandhi says, “The government thinks it can silence us. It thinks that by showing us this (police) force, it can make us quietly sit in buses… But we have a purpose.”

Police were seen pleading with Priyanka Gandhi to cease the protest before dragging her into a car. She was, however, observed fighting with a police officer while pointing to her legal right to protest.

To prevent the protest plan, which called for marches to Rashtrapati Bhavan and the Prime Minister’s residence, police had blocked off critical sites. Prior to the Congress march, the administration had already issued prohibitive orders that forbade mass assemblies in some areas of Delhi. Police had refused to grant permission for the rally, citing these limitations.

“What India has built brick by brick, starting almost a century ago, is being destroyed in front of your eyes. Anybody who stands against this idea of onset of dictatorship is viciously attacked, jailed, arrested and beaten up,” he said.

The BJP retorted with a jibe, asking if there’s democracy within the Congress, calling it a “dynastic” party.

Congress members arrived in Parliament wearing black clothing before the demonstration began, led by Sonia Gandhi, the party’s leader, and Rahul Gandhi. Congress members erupted in outrage over the alleged abuse of the investigation agencies and the government’s “ignorance of people’s difficulties,” and the proceedings were suspended.

A statement from the party said its Lok Sabha and Rajya Sabha members would hold a “Chalo Rashtrapati Bhavan” march from Parliament. Congress Working Committee (CWC) members and other senior leaders planned to take part in “PM House gherao”.

The Congress has been alleging the “people’s issues” are being ignored. The government, however, has said the situation isn’t particularly bad.

However, according to government information released this month, India’s annual retail inflation increased to 7.01 percent in June from 6.26 percent a year earlier. For the sixth consecutive month, this was above the 2–6% tolerance range set by the central bank.

Additionally, demonstrations are being staged against the Goods and Services Tax (GST) being applied to necessities that were previously exempt from it.

New Delhi: Real Madrid coach, Carlo Ancelotti has announced that he will retire when...
India

New Delhi: Punjab police has made a major breakthrough ahead of Independence Day. Punjab...
Education

New Delhi: Real Madrid coach, Carlo Ancelotti has announced that he will retire when...
India

New Delhi: Punjab police has made a major breakthrough ahead of Independence Day. Punjab...
Education