Celebrities team up to give Blue Tick for Children’s rights 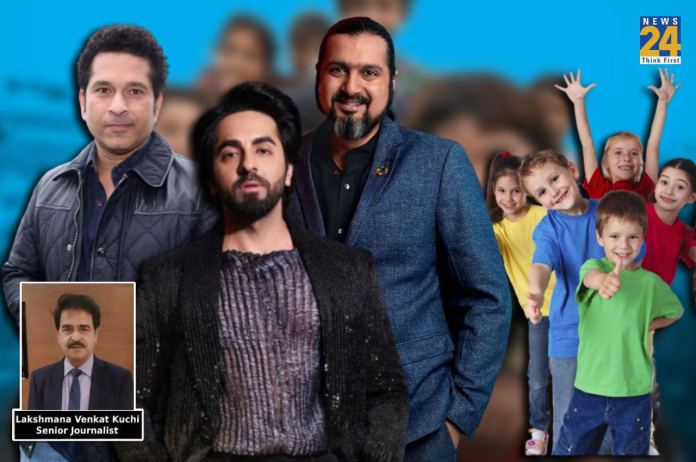 All the important government buildings like Rashtrapti Bhavan, Parliament House, PMO, governor’s houses, assemblies, and UN Offices, heritage sites and national monuments were lit up in Blue to mark the promulgation of Convention on the rights of the Child, done 33 years ago this day.

The day was celebrated as the World Chidren’s Day, in commemoration of which several celebrities including cricketing god – Sachin Tendulkar, film star Ayushman Khurana and Grammy award winning musician Ricky Kej came together to ssue a call for guaranteeing rights to every child.

On World Children’s Day, the celebrities joined in the annual celebration to mark the

Convention on the Rights of the Child (UNCRC), that was promulgated 33 years ago on this day, today.

In Delhi, the Rashtrapati Bhavan (President Building), the Parliament House, Prime Minister’s Office (North and South Block), Qutub Minar – a heritage monument, along with UN Offices lit up in blue. #GoBlue is a symbolic expression that has yielded tremendous results over years in drawing much-needed attention to rights #ForEveryChild in India and globally.

Raj Bhawans (Governor House) and Legislative Assemblies in states also went blue for children along with railway stations and airports. Other iconic monuments across the country that lit up in blue include the Amber Fort (Jaipur), Chhatrapati Shivaji Maharaj Terminal and the Municipal Corporation (Mumbai), the Charminar (Hyderabad), MANUU University, the Rumi Darwaza, Lucknow University and Char Bagh Railway Station in Lucknow, the Jahaz Mahal and India’s first private station RaniKamlapati Station in Madhya Pradesh, the Howrah Bridge, the Bidhan Sabha, Nehru Children’s Museum, and the Nipponzan Myohoji Buddhist Temple in Kolkata, Kankariya Lake, Ellis Bridge and Airport in Ahmedabad, and the Brahmaputra Heritage Centre in Assam.

In Chhattisgarh, 1000 village streets were painted blue; and in Madhya Pradesh, a village called Lambatalab went blue, with messages of education, nutrition for every child, painted on walls.

The week-long activities highlighted the importance of inclusion and non-discrimination #ForEveryChild best demonstrated through sports, thereby disrupting gender stereotypes and social barriers, particularly for the most marginalized and vulnerable.

Ms. Cynthia McCaffrey, UNICEF India Representative said, “World Children’s Day is a time for all of us to renew our collective promises for every child, especially for girls, to be included and protected and reach their full potential, unhindered by gender stereotypes, inequalities, and other barriers. This week we have advocated for inclusion and driving away discrimination as symbolically kicked off by children and celebrities. UNICEF India is privileged to support this cross-sectoral movement in India, a country that has made remarkable strides in improving outcomes for its youngest stakeholders and sees children as force multipliers for generational transformations.”

Children also took over media across India and interacted with heads of states, statutory bodies and media channels. In Jharkhand, 20 adolescent reporters participate in a press conference addressed by the Chief Minister and interviewed him on Child Rights, Sports, Inclusion and Diversity. In Gujarat and Karnataka, children became journalists and interviewed on the ‘Sports for Development’ theme. In Uttar Pradesh, children took charge of Private FM and community radio channels. In New Delhi, children took over radio channels and interacted with editors of Amar Ujala, the fourth largest Hindi Daily. In Odisha, 100 child reporters from tribal areas published their own magazine, launched on World Children’s Day.

Article 31 of the Convention on the Rights of the Child recognizes every child’s right to rest, leisure, and play. Sport is important to a child’s physical and mental development, in building life skills, promoting inclusion and leadership. Article 2(1) of the Convention prohibits discrimination of a child based on “the child’s or his or her parent’s or legal guardian’s race, colour, sex, language, religion, political or other opinion, national, ethnic or social origin, property, disability, birth or other status.