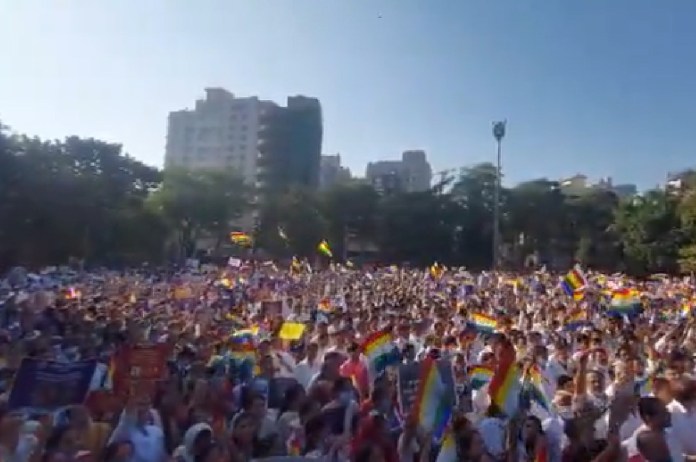 New Delhi: The decision of Jharkhand government to declare Sammed Shikharji (Parshwanath Parwath) located in Giridih district in the state as an eco-tourism spot has been severely opposed by the Jain community following protests across the nation.

On Sunday, January 1, 2023, the community held a nation-wide protest against the Hemant Soren-led Jharkhand government. Meanwhile, the Red Fort in Delhi witnessed a massive protest of generally a “peaceful community.”

There are a number of demonstrations against the issue since the state government announced its plan to turn Shikharji temple in an eco-tourist spot. In this regard, several memos were submitted to district collectorates where the demonstrations took place, requesting to secure sanctity of the temple.

A video has surfaced on internet where the protestors have disturbed movements of a convoy leaders and shown them black flags for not standing up for the Jain community. The incident was played out in Ashoknagar in Madhya Pradesh.

Meanwhile, in another video, protestors were seen holding ‘mashaals’ (flambeaus) to show dissent to the Hemant Soren-led Jharkhand government for proposing to make Shikharji temple a tourist spot.

The cricketor-turned-politicians said that he will talk to the people in authorities to make sure that order will be dismissed.

Why Jains are protesting decision?

While talking to News24, a devotee said there is a threat to the temple’s sanctity if it is declared as an eco-tourism spot. The devotee referred to Girnarji temple in Junagad of Gujarat where an unlawful and anti-social encroachment has taken place, hindering the modesty of the place.

Both the communities of Jain society that is Digambara and Svetambara consider Shikharji as Tirtha (pilgrimage site). It is so because twenty of the twenty-four Jain ‘Tirthankaras’, together with numerous other monks, obtained Moksha from here.

The community fears that there will be chaos such as use of abusive languages, selling and buying of alcohol and tabacco and so on. Among all the concern, Jains are also afraid that the young couples would look up to the place as a romantic spot and not as a pilgrimage spot.