Bollywood Vs Tollywood Box Office Collection: Who won the race? 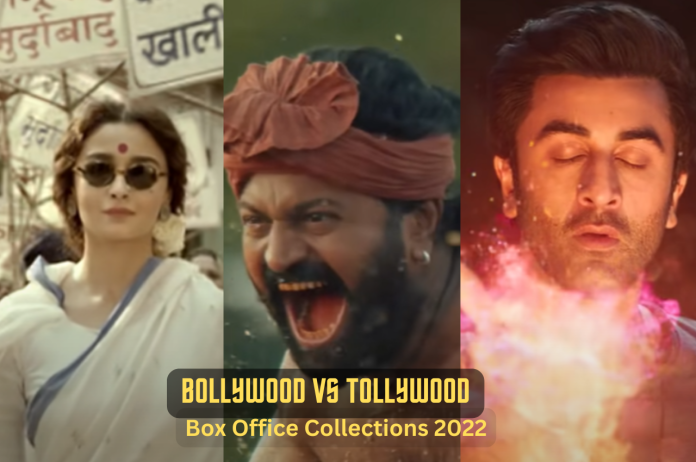 Bollywood Vs Tollywood Box Office Collection: The year 2022 will be remembered as the one in which the Indian box office came back to life and the Next Big Idea emerged as the true star.

Let us draw a comparison between Tollywood and Bollywood box office collections and check who ultimately won the race.

RRR: Two of the biggest Telugu performers, Jr. NTR and Ram Charan, played the Telugu liberation heroes Komaram Bheem and Alluri Seetharama Raju in director SS Rajamouli’s RRR. There is scene after scene of brilliance in the movie RRR. The film was made with a budget of Rs. 600 Crore and earned a total of Rs. 1151 Crore.

KGF 2: Following RRR, Prashanth Neel’s KGF: Chapter 2 from Rocking Star Yash was yet another box office success from the Kannada film industry. The movie received praise for its powerful scenes, which Yash completely owned with his swagger and style. The film is made with a budget of Rs. 100 Crore and earned approx. Rs. 1235.2 crore.

Kantara: Kantara by Rishab Shetty was a surprise success. The movie perfectly captures the Bhoota Kola custom (a practise followed in coastal Karnataka). The movie is made with a budget of Rs. 16 Crore but earned Rs. 263.94 Crore.

Vikram: Vikram, directed by Lokesh Kanagaraj, stars Fahadh Faasil, Vijay Sethupathi, and Kamal Haasan in the key roles. Everyone of all ages like this combination. Over Rs 400 crore was ultimately made by Vikram at the box office. In Vikram, there are many memorable scenes.

Drishyam 2: At a time when movies were not doing well financially, Drishyam 2 had a strong opening and trended very well. The Ajay Devgn and Tabu starrer earned Rs. 228.74 Crore, while it was made only at Rs. 90 crore.

Brahmastra: Part 1 Shiva: The movie turned out to be Ranbir Kapoor and Alia Bhatt’s biggest opening. It earned a magnificiant number of Rs. 254 Cr (all languages).

The Kashmir Files: The movie made Rs. 3 crore when it debuted, but because to its intense trending, it quickly began to bring in double digit sums on a daily basis. The movie was made at Rs. 14 Crore and earned Rs. 252 crore.

Bhool Bhulaiya 2: The movie did incredibly well at the box office. Following the release of this movie, Anees Bazmee landed over three projects while Kartik Aryan and Tabu received appreciation for their performances.

Gangubai Kathiawadi: The first project Alia Bhatt worked on with Sanjay Leela Bhansali was successful since it was the largest internet hit in Bollywood history in addition to performing well at the box office. The movie earned rs. 126.51 Crore, while it was made with a budget of rs. 180 cr.