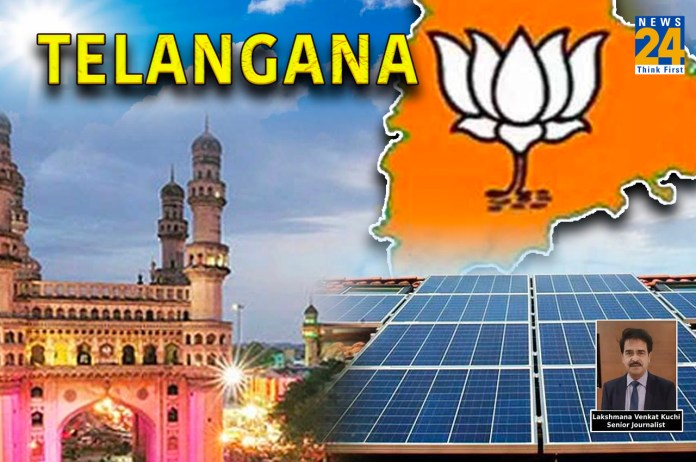 The BJP will also be relying on soft power for achieving hard power in the Telugu-speaking state of Telangana and has plans to produce films that would help shape and propagate its political narrative in the run up to general assembly elections due next year.

A Telugu feature film, one that is focused on BJP’s political perspective, context and narrative is in the works and is on the floors, scheduled to be ready for release next year.
The film is titled Razakar and is about the story of the oppression, humiliation, atrocities and massacre of common people in Hyderabad state, especially of the Hindus, at the hands of the militia of Razakars under the last Nizam. BJP leader Gudur Narayana Reddy is the producer of the historical movie aimed at helping the BJP in elections.

In South India, films and film stars have been part and parcel of politics and electoral politics what with film superstars becoming successful politicians, rising to become the chief ministers, in Tamil Nadu and combined Andhra Pradesh.

But, in Tamil Nadu, film stars and script writers were always in public life, social service and politics directly for a long time and naturally progressed to the top. However, in Andhra Pradesh, the demi-god that NT Rama Rao was, was launched as a politician and he trounced the oldest political party in the country, the Congress with a party he formed just nine months ago.

But of course, the days of film stars turning successful as politicians and becoming Chief Ministers are over, what with professional politicians well entrenched and occupying the political space. At best, the film stars and celebrities can play the supporting role, political analysts say.

But, films as campaign and propaganda vehicles are as old as politics itself, best exemplified by the films scripted by M Karunanidhi, featuring MG Ramachandran to propagate the Dravidian ideology and its welfare politics.

More recently in combined Andhra Pradesh, Congress took the help of a film, “Pichodi chetilo raayi” (stone in the hands of a mad man) pillaring Chief Minister N Chandrababu Naidu and his antics and added to its firepower against the ruling dispensation and dislodged him in the elections.

Now, coming to the film in the backdrop of police action “Operation Polo” – depicting the Hyderabad police action of September 1948, in which country’s forces annexed Hyderabad state into the Union territory. But this is seen from two different perspectives – while the BJP sees it as liberation of Hyderabad state, the Congress and TRS view it as national integration day.

Now the film Razakar, like the biopics and perspective films of yore used in Andhra politics, be setting the context for Telangana politics, drawing from a slice of history as the BJP sees it, and it would reach out to the masses and is hoped to influence them and their thinking.
Said a film critics, the success of Kashmir files has made the political parties rediscover the power of movies to become tools of political perception management.

Film director Ram Gopal Varma is also planning a feature film on Andhra Pradesh politics. He thinks that the film Razakar, whose shooting is taking place on the outskirts of Hyderabad city, promised to an extremely interesting idea.

The film is being directed by Y Satyanaraya, who has mounted a set depicting a 1946 village. The theme of the film is the atrocities heaped on the people by Razakars and the plight the common man underwent in a bid to appeal to the people and get them thinking and apply the sentiments to the current situation on the ground.

According to Lok Sabha member and AIMIM chief Asaduddin Owaisi, the proposed film could be another device in the larger project of othering a community.

Look at the way a heinous crime – of gruesome murder of a girl by her boyfriend – has been turned into a love jihad saga. Even films, like other media, has the potential to be used to spice up, twist the truth and tell lies and portray a section of the community as objects of dislike and haste, he reportedly said in reaction to the film. The only hope, according to him was in Telangana, the Chief Minister K Chandrashekhara Rao, would thwart all communal designs.