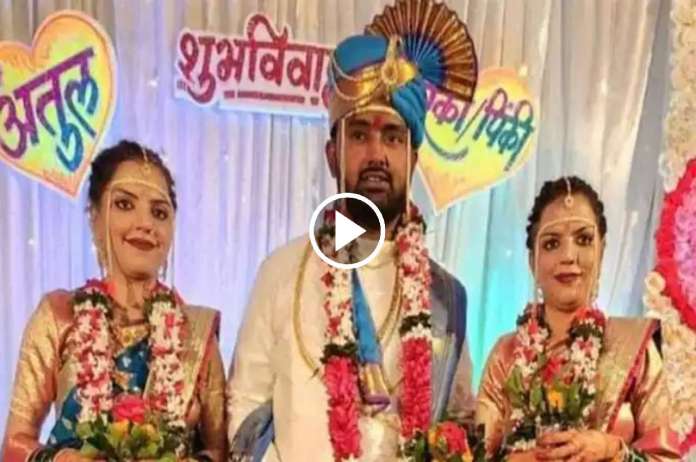 Twins are considered to have numerous similarities. They not only appear same, but their likes and dislikes are oftentimes similar as well. A similar incident occurred in Solapur, Maharashtra, when two twin sisters fell in love with the same person. Both had an affair with the same person, who they later married. However, this had landed the unfortunate groom in hot water, since the police had filed a complaint against him.

Yes, the twin sisters fell in love with Atul Malshiras, 34, who manages a travel firm in Mumbai and is also a practising IT engineer, and the three are now married. The footage of these seven rounds has just gone viral on social media.

This is how the love story began

Rinky and Pinky are twin sisters who live in Solapur, Maharashtra. When their mother became unwell, they drove her to the hospital in Atul’s car. Meanwhile, Atul became close to both twin sisters, who fell in love with him. On Friday, Atul married both of his sisters. However, as soon as the police learned about the situation, they filed a complaint against the groom under Section 494 of the IPC.

The video of a three-person marriage is going viral on social media. In the 28-second video, you can see the groom standing on the shoulders of his companions, pressuring both girls for the garland, but a girl climbs up with the help of her relative and garlands the groom. Following that, the second bride likewise garlands the groom in the same manner. This video has received thousands of views.

Atul married Twin sisters who work as IT engineers in Mumbai in Solapur district of Maharashtra.

Families of Brides & Groom agreed for this Marriage. pic.twitter.com/swPzoYOiYN