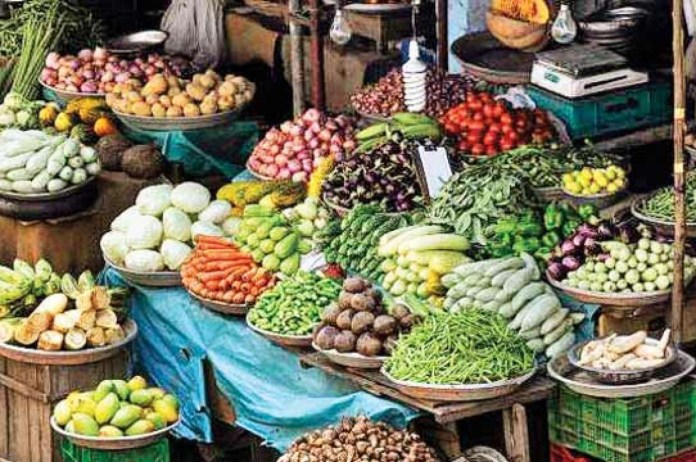 New Delhi: India’s headline retail inflation in July was the lowest in five months, thanks to decreasing global commodity prices and domestic food costs. However, it was still over the Monetary Policy Committee’s (MPC) medium-term target of 6.71 percent, which supported the Reserve Bank of India’s recent monetary tightening (RBI).

Official data on industrial production revealed a normalising base effect. In June, India’s factory output increased 12.3% year over year (YoY), down from a 12-month high of 19.6% in May, according to the Index of Industrial Production (IIP).

In reality, excluding capital goods, industrial output was stronger in June than in May as compared to the pre-Covid period of 2019-20.

The Consumer Price Index-based YoY inflation in July was considerably lower than 7.01 percent in June, per statistics issued by the National Statistical Office (NSO) on Friday. The Consumer Food Price Index (CFPI), which peaked in June at 7.75 percent, fell precipitously to 6.75 percent in July.

“The slowdown in consumer inflation for the third consecutive month suggests that inflationary pressures, though elevated, are on a downward trend. Encouragingly, households’ inflation expectations also improved in July, reflecting the effectiveness of the RBI’s and the government’s efforts to tame inflation,” said Rajani Sinha, chief economist, CARE Ratings.

Fuel and light inflation as measured by the CPI was 11.76% in July, down from 10.39% in June. Fuel inflation is anticipated to decrease further as a result of the decline in global oil prices brought on by worries about a recession in industrialised nations.

“Many imported components also saw a decline in prices in July, reflecting the lagged pass-through of the moderation in international commodity prices. Today’s inflation print provides further evidence that inflation in India has peaked, and will likely moderate in the coming months,” said Rahul Bajoria, India chief economist with Barclays.

Still, analysts expect the MPC to go for another round of rate hike. “Given the MPC’s focus on anchoring inflation expectations and the RBI governor’s statement on bringing inflation closer to the target of 4 per cent over the medium term, we expect another rate hike of 10-35 bps in the September 2022 policy meeting. Thereafter, we believe the MPC decisions shall be extremely data-dependent,” said Aditi Nayar, chief economist, ICRA.

After the most recent round of repo rate increases earlier this month, RBI Governor Shaktikanta Das adopted a hawkish stance, saying that since growth momentum is anticipated to be resilient despite external headwinds, the monetary policy should continue to withdraw accommodation in order to keep inflation close to the target of 4% over the medium term.

From July onward, further base normalisation will provide a slightly clearer view of IIP’s yearly increase.

“As anticipated, the normalising base resulted in a fairly broad-based dampening of IIP growth to 12.3 per cent in June 2022, although this was appreciably higher than our forecast of 10.2 per cent, led by the manufacturing sector,” Nayar said.

The data figures should not be interpreted on a YoY basis, according to an official press release, given the exceptional circumstances brought on by the Covid-19 epidemic since March 2020.

The category that is taking the longest to recover is primarily the capital goods one. Even though it increased by 26.1% year over year in June, growth from the pre-Covid year of 2019–20 was only 0.5%. In comparison to the pre-Covid period, there was a decrease in production in April and May 2022.