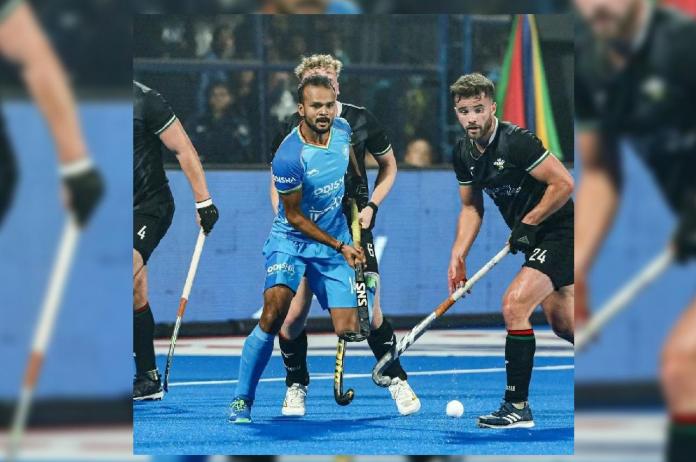 New Delhi: It was the final group match for India, the host were favorite against the Wales at Kalinga Stadium in Bhubaneshwar. But the Wales proved their worth and fight with all their core till the end of the Quarter 4. Wales will now leave for their home but they ended their journey on the high spirit.

India defeated the debutant by 4-2 goals, thanks to Akashdeep Singh who was the star of the game as he scored two goals. Shamsher Singh and Harmanpreet Singh scored one goal each. Wales, Gareth Furlong and Jacob Draper scored one goal each and gave a tough challenge to India. But it was host who had the last laugh.

India win a thriller against Wales in the final match of the day to finish 2nd in Pool D. India will face New Zealand in the crossover for a spot in the quarterfinals. #HWC2023

Reynolds-Cotterill makes a good save

The last and final match of Pool D will remembered for the efforts made by the Wales goalkeeper Reynolds-Cotterill. But that was not enough to win the match. Indian forward Akashdeep Singh created a good chance and unleashed the shot but his efforts goes in vain as Reynolds-Cotterill made a good save and does not let India to take the lead.

Defender Nilakanta Sharma dribbled very well and entered the Wales D but efforts was all in vain, as Wales goalkeeper played a crucial role and made a wonderful save.

Indian forward Akashdeep Singh made the most of this opportunities and helped India to take the 3 crucial points against the Wales. Within just 27 minutes, he attempted the first goal on target.

Shamsher Singh has done his job with perfection after skipper Harmanpreet Singh missed the change through his drag-flick. Shamsher found himself in the right place and quickly intercepted the ball and netted the first goal for the host.

In the 32 minutes Akashdeep received the pass from Mandeep Singh inside the Wales and he unleashed the shot on the target and India takes the lead by 2-0. After that Wales leveled the scoreboard, as Gareth Furlong and Jacob Draper perfectly drag-flicked and put Wales equalled on the scoreboard.

Akashdeep Singh strike back as he received a brilliant pass from Sukhjeet and released a shot towards the target. India once again in lead by 3-2.

Akashdeep Singh is our Player of the match for scoring a brace to help India cruise to a comfortable victory.

India won the last match of their Pool stage against Wales but England have the better goals difference as they advanced into the Quarter-final. India will now face New Zealand for their crossover match on January 22 at Kalinga Stadium in Bhubaneshwar. New Zealand had lost their last Pool match against Malaysia by 2-3.

The winner between India and New Zealand will advance into the Quarter-final and will play against the winner of Pool B. As the table stands either Germany or Belgium will top the table.