‘What magic you did on Mamta?’ Gehlot asks Dhankhar 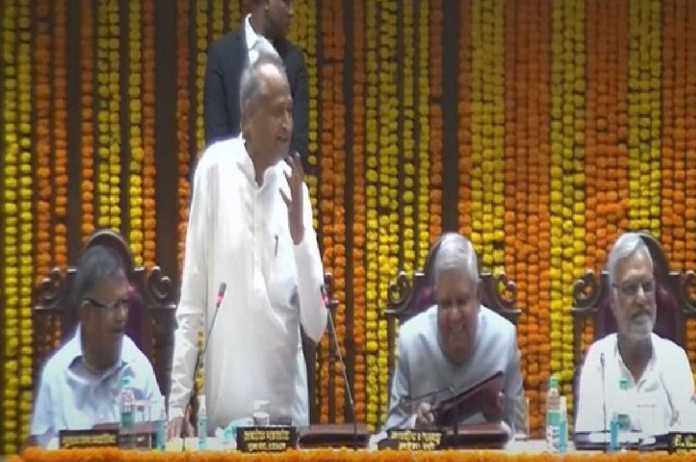 New Delhi: Rajasthan Chief Minister Ashok Gehlot, in a lighter vein, asked Vice President Jagdeep Dhankhar what “magic” did he do on a “tough lady” like Mamata Banerjee that she decided to abstain from voting during the VP election.

Friendly banter between the two was witnessed during the felicitation program in the Rajasthan Assembly on Tuesday as the Vice President, during his address, also said that he once did magic himself during the state assembly elections.

“Please tell us the secret…” Gehlot to Dhankhar

Speaking on the occasion, Gehlot cited the relations Dhankhar shared with Mamata Banerjee during his three-year tenure as the Governor of West Bengal before being elected Vice President in August this year, and said, “Your relations were the topic of discussion in the country till the time you were there for three years. What magic did you do that when you became the vice presidential candidate, the same Mamata Banerjee abstained from voting? Please tell us the secret.”

“What magic did you do on a tough lady like Mamata? I am the magician,” he said.
Gehlot further asked if Dhankhar was a “bigger magician” than him.

Gehlot’s “I’m the magician” remark comes amid the buzz of him being the frontrunner in the race for the Congress president’s post. He is believed to be close to the Gandhi family who is said to be backing the Rajasthan CM for the post.

Responding to the Chief Minister’s remark, VP Dhankhar jokingly said, “I remember when the Rajasthan Assembly elections were underway, Rajendra Rathore was the candidate from Churu. I went to his rally. The magic of the magician is okay (pointing towards Gehlot), but even I did magic that he never lost an election till today”.

“The Chief Minister asked what was that magic that Mamata Banerjee took the decision (to abstain from voting in vice presidential elections). I am beyond politics. Why are the political decisions taken, how are they taken and on what basis are they taken, Ashok Gehlot, Vasundhara Raje and others can throw light on this,” he added.

Notably, during his tenure as the Governor of West Bengal, Dhankhar and Mamata were believed to have clashed on various occasions.

Dhankhar also joked that he had once sought “help” from former Chief Minister of Rajasthan Vasundhara Raje regarding Mamata in the form of a “magic spell”.

“Vasundhara Raje started in the parliamentary area in 1989. I also got this opportunity. Since then my relations with her have been personal. I even sought help from her after becoming the Governor of West Bengal that my Chief Minister is Mamata Banerjee. Please tell me some magic spell,” he said.