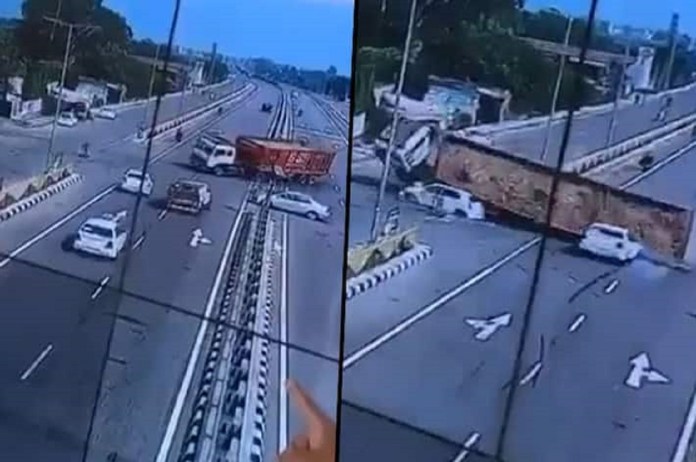 Accident Video: In a tragic accident, three members of a family died in a road accident after a loaded trailer lost balance and overturned on a car on the Phagwara-Rupnagar highway on Monday.

In the accident, which took place at Punjab’s Behram on the national highway connecting Phagwara and Chandigarh, three others persons, in a different vehicle, also sustained injuries.

The video, captured on CCTV, shows a loaded trailer losing balance and overturning on a car while trying to make a sharp turn at high speed. Two speeding cars can be seen crashing into the trailer, while one gets completely destroyed.

Video | A lorry loaded with cargo carelessly swerved into a car collision on the #Pakwara–#Chandigarh #NationalHighway in #Punjab.

Three members of the same family who were in the car were killed – police investigation pic.twitter.com/XuSmpnJa9u

A couple and their son were in the crushed car and died on the spot. Three passengers in the other were injured.

According to reports, the deceased have been identified as Gurkirpal Singh, his wife Ramanjit Kaur and their son Jasmeet Singh, residents of Cheema Khuddian village of Gurdaspur.

“All three were sent to the nearby Guru Nanak Mission Hospital where doctors declared them brought dead. The deceased have been identified as Gurkirpal Singh, his son Jasmeet Singh and his wife Ramanjeet Kaur, all residents of Gurdaspur,” the SHO Gurdial Singh was quoted as saying by news reports.

The police arrested the driver, Major Singh, and a case under Sections 304 and 427 of the IPC was registered against him at the Behram Police Station.