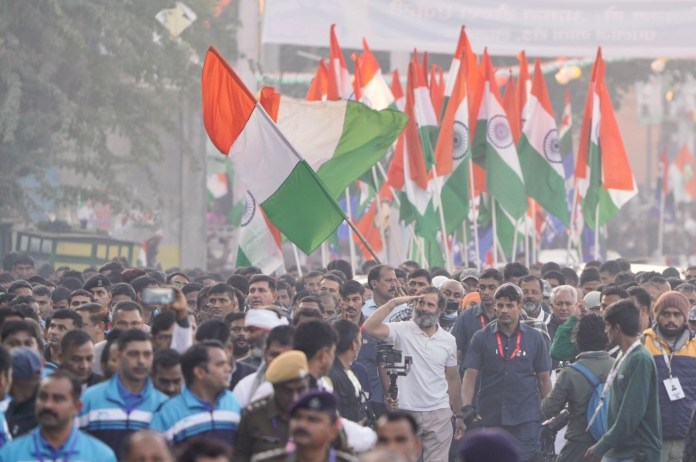 Security breach in Bharat Jodo Yatra: The Congress party on Wednesday wrote a letter to Union Home Minister Amit Shah requesting him to ensure the safety and security of Rahul Gandhi. The Party has urged the government to take immediate action to provide proper protection to Rahul Gandhi and the people who join Bharat Jodo Yatra.

The letter read that on December 24, when the yatra entered Delhi, the security of the Congress MP and the Yatris was jeopardised. Congress said that throughout the entire episode, Delhi police did nothing.

Letter to the home minister

Congress general secretary KC Venugopal said in a letter to the home minister that the Yatra’s security was repeatedly jeopardised when it entered Delhi on Saturday.

The Union Home Ministry-affiliated Delhi Police, according to a letter, “totally failed in managing the rising crowd and establishing a perimeter around Shri Rahul Gandhi, who is assigned Z+ Security.”

The situation, it continued, was so bad that Congress workers and Bharat Yatris who were accompanying Mr. Gandhi had to set up a perimeter for security. It claimed that the Delhi Police were “mute spectators.”

The opposition party also claimed that Yatra participants were being questioned by the Intelligence Bureau.

In Haryana, a coalition led by the BJP is in power.

The letter continued by stating that it is everyone’s constitutional freedom to travel wherever in India. “A Padvatra to bring peace and harmony to the nation is the Bharat Jodo Yatra. The government should protect the safety and security of the Congress leaders rather than engage in vengeful politics “It was ad.

The party demanded stronger security for Rahul Gandhi’s Yatra when it entered Punjab and Jammu and Kashmir, citing the sacrifices made by Congress leaders such as Indira Gandhi and Rajiv Gandhi for the country’s unity.

“The Bharat Jodo Yatra will next go through the delicate states of Punjab and J&K beginning on January 3, 2022. Regarding this, I kindly ask you to act quickly to safeguard the protection and safety of Shri Rahul Gandhi, a Z+ protectee, as well as of all the Bharat Yatris and leaders participating in the Bharat Jodo Yatra “It said.