President Murmu to give away Digital India Awards 2022 on Saturday 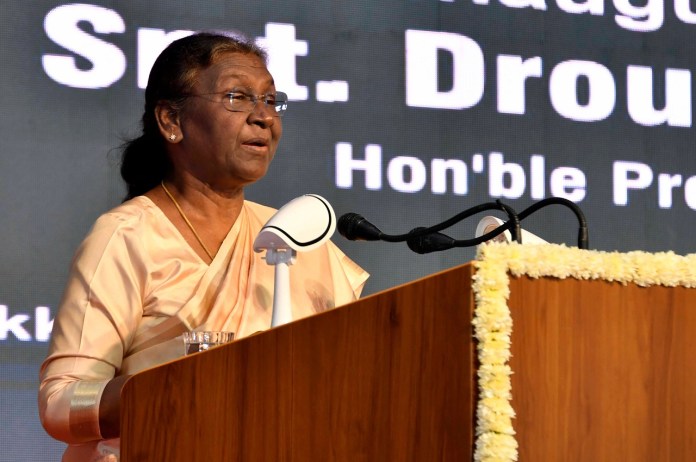 New Delhi: President Droupadi Murmu will present the coveted Digital India Awards, which encourage and honour innovative digital initiatives by government entities at all levels, on Saturday, the Ministry of Electronics & IT said in a statement.

The Digital India Awards 2022 aims to inspire not only the government entities but also startups and grassroots level digital initiatives in fulfilling the Digital India vision.

Minister for Electronics and IT Communications and Railways, Ashwini Vaishnaw, and Secretary, Ministry of Electronics and Information Technology (MeitY), Alkesh Kumar Sharma will also attend the event in New Delhi, along with other dignitaries.

“The selection process for Digital India Awards includes nomination of digital initiatives by Government entities through the Rashtriya Puraskar Portal (https://awards.gov.in) managed by Director General, Awards at the Ministry of Home Affairs,” the ministry said.

The unified portal has been developed and operationalised on the directions of the Prime Minister for managing all National Awards. This is followed by Ranking of entries by the Nomination Processing Partner, Indian Institute of Technology (IIT) Delhi, and selection of Winners by a jury constituted under the chairmanship of Secretary, MeitY with representation from government, industry and academia.

The seventh edition of the awards includes categories such as digital empowerment of citizens, digital initiatives at grassroot level, digital initiatives for ease of doing business, data sharing and use for socio economic development, and public digital platforms – central ministries, departments and states.

Other categories include digital initiatives in collaboration with startups, best web and mobile initiatives complying with guidelines for Indian government websites and accessibility guidelines.

“Digital India Awards are instituted under the aegis of National Portal of India (https://india.gov.in), which provides single-window access to information & services being offered by Indian government entities at all levels,” it said.