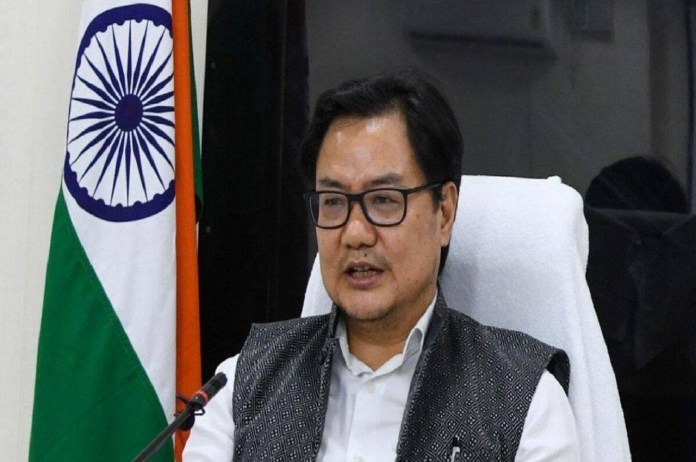 New Delhi: Union Law Minister Kiren Rijiju on Monday wrote a letter to the Chief Justice of India DY Chandrachud “suggesting” the Centre’s role in the appoitment of judges to the Supreme Court.

The Indian Express reported that in his letter, the union minister has proposed to elect an nominee of the central government led by the Bharatiya Janata Party (BJP) in the panel to shortlist the judges.

As per the media sources, the letter is yet to be discussed by the Collegium. The proposal comes after the last hearing on a plea demanding contempt proceedings against the Centre for delaying the appointment of judges despite recommendations by the Collegium. The petitioner was the Advocates Association Bengaluru.

It should be noted that the tussle over the Centre’s participation in shortlisting the judges has been continued since the National Judicial Appointment Commission (NJAC) Act was struck down.

Earlier, Vice-President Jagdeep Dhankhar also condemned the move of scrapping the NJAC in the Parliament.

The NJAC Act, passed by parliament in 2015, gave the Center a role in appointing judges, replacing the decades-old Collegium system.

Disagreeing with the Act, petitions demanding its repeal. The pleas contended that the role of government would compromise the judiciary’s independence.

After which, a Constitutional bench struck down the Act while referring to the Emergency of 1995-1997 that was imposed by the Indira Gandhi-led central government.

Earlier, Dhankar, who was also a Senior Advocate, said  “Any incursion by one institution into the domain of another has the potential to upset the governance apple cart”.