HomeIndiaIAF to conduct Suryakiran air show in Bhubaneswar tomorrow; Here’s all you...

IAF to conduct Suryakiran air show in Bhubaneswar tomorrow; Here’s all you need to know

Nine pilots will fly Hawk aircraft which are being made in India by Hindustan Aeronautics Limited (HAL). 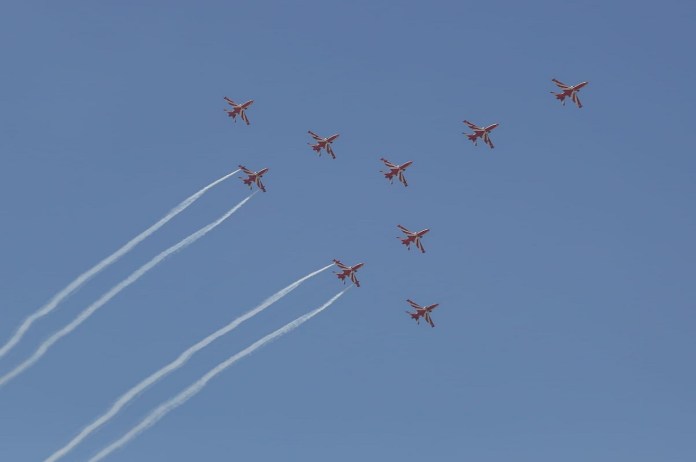 Bhubaneswar: The Suryakiran aerobatic team of Indian Air Force conducted a full rehearsal showing the glimpse of their skills on Thursday, a day ahead of its scheduled air show in Bhubaneswar.

Nine pilots flying Hawk aircraft, during rehearsal today over Kuakhai bank at Baliyatra ground in Bhubaneshwar, have left the city’s residents in amaze.

In the final show over Kuakhai bank tomorrow, nine pilots will fly Hawk aircraft which are being made in India by Hindustan Aeronautics Limited (HAL). The show is scheduled to begin at 10 AM and will continue till 11 AM.

The pilots will show various skills with various formations, diving.

Police made an elaborate arrangement of a large crowd gathering to witness the show. Around 30,000-50,000 people are expected to come to the event.

As many as 20,000 police platoons will be looking after the arrangement and will be managing the crowd and discipline during the show.

A similar air show will also be conducted over Raj Bhawan in Puri on September 18.