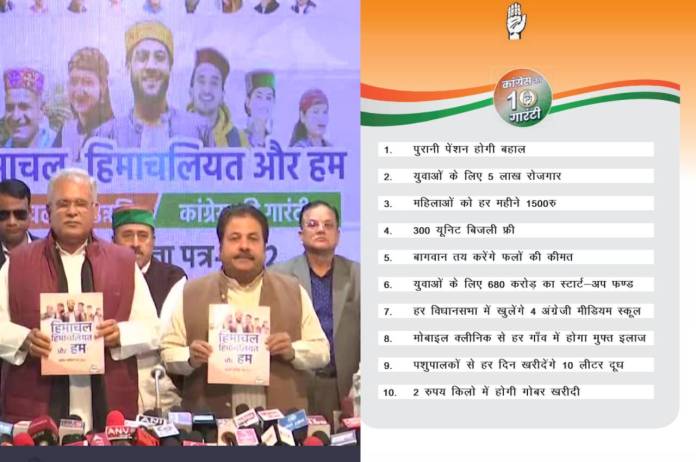 New Delhi: Having left only a week for Himachal Pradesh to go for Assembly polls, the Congress party Saturday has released its manifesto in the hill state, making 10 promises.

Congress’ 10 guarantees include bringing back the Old Pension Scheme (OPS), Rs 1500 per month to women, 300 units of free electricity and purchase of cow dung at Rs 2 per kg.

Congress promises 10 guarantees to the public incl implementation of OPS, Rs 1500 per month to women,300 units of free electricity & purchase of cow dung at Rs 2 per kg pic.twitter.com/PeKctGGazm

Congress campaign in the hill state had gained momentum with the party’s general secretary Priyanka Gandhi Vadra took the charge as main campaigner for the upcoming Assembly polls.  She has been holding a number of rallies here claiming that the Congress stands on its commitments.

During her rally in Nagrota Bagwan assembly constituency of Kangra district yesterday, Priyanka Gandhi said that the Congress had restored Old Pension System in Chhattisgarh as well as in Rajasthan and it will do the same in Himachal.

The polls will be held on a total number of 68 constituencies. Congress, Bharatiya Janata Party (BJP) and also Aam Aadmi Party (AAP) have entered a strong competition in the hill state.