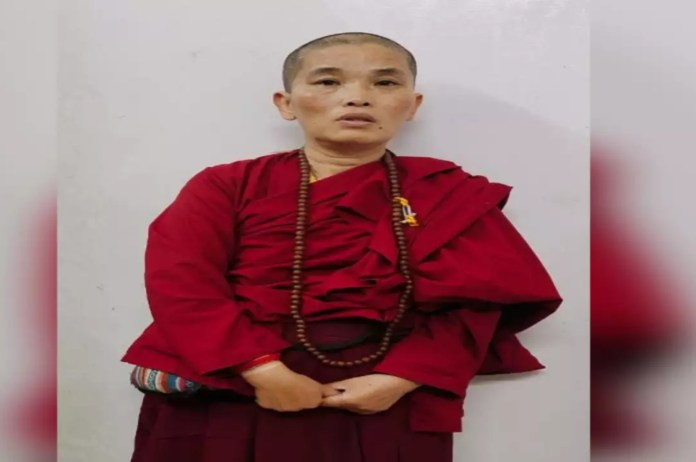 New Delhi: A Chinese woman, who was living in disguise as Buddhist monk, was detained by the Delhi Police for allegedly engaging in anti-India activities.

Cai Ruo, who purported to be a Buddhist monk, is believed to be a Chinese spy, according to sources cited by the news agency IANS.

Cai Ruo is a “well-trained and cunning individual who tried to mislead the investigators by claiming that Chinese Communist leaders wanted to kill her and therefore, she fled to India”, a source told the news agency.

As “Dola Lama, a Nepalese national,” the woman had been staying in India.
She also acquired a “Nepalese Identity Card” to demonstrate her Kathmandu residency.

She had no knowledge of Nepali but spoke English with the Delhi Police officers with ease. As it turns out, she is a fluent Chinese speaker, say the cops.

She possessed a Chinese passport in her name, and the police eventually established that she had been residing in India using that passport.

In 2020, she crossed into Nepal from West Bengal, India, at the Raniganj border crossing. She returned to India after getting IDs from Nepal.

She resides in China’s Hainan Province, according to her registration with the Foreigners Registration Office. She allegedly tried to stir up discontent around the nation.

“She told us that as she was Buddhist and the Communist leaders wanted to kill her. She had no other option but to flee China. However, we have found that she had been spying and was involved in anti-national activities,” the source said.

The source claims that authorities were informed that a female Chinese spy had been living in the nation’s capital. After evaluating the input, Cai Ruo was discovered to be supporting anti-national acts, according to IANS.
A police team was then put together, and a raid was carried out.

Also Read :- Plea seeking survey of underground ‘tehkhana’ in Gyanvapi complex to be heard on Nov 2

Eventually, at around 1 pm in Majnu Ka Tila, Delhi, Cai Ruo was apprehended from her hiding place.

The Indian Penal Code’s Laws 120 B (criminal conspiracy), 419 (cheating by personation), 420 (cheating and dishonestly inducing handover of property), 467 (forgery of valuable security), and other pertinent sections, as well as the Foreigners Act, were used to bring a case against her.

“She was living in India illegally as a Buddhist monk so that she could evade security agencies’ scanner. She had been spying and hatching conspiracy against the nation. She had been found in the possession of fabricated documents, ID cards… we are taking this matter seriously,” the source said.