India will progress only if we stop fighting and start learning from each other: Arvind Kejriwal 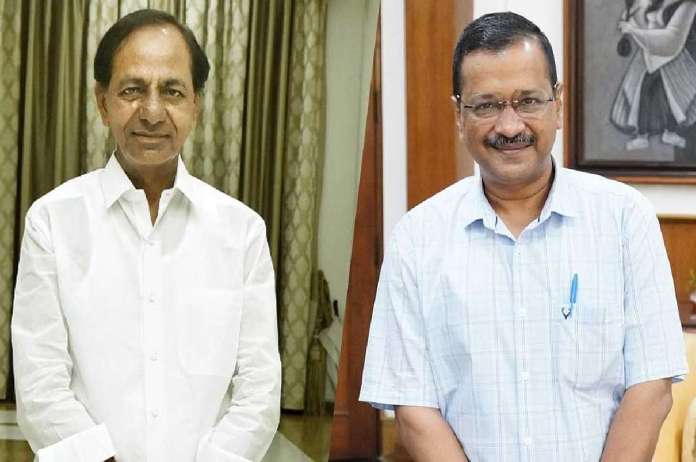 Khammam, Telangana: AAP National Convenor and Delhi CM Shri Arvind Kejriwal addressed a public meeting organised by Bharat Rashtra Samithi in Khammam, Telangana. The AAP Convenor took part in the meeting on the invitation of BRS President & Telangana CM Shri K Chandrasekhar Rao. The meeting was also attended by Punjab CM Sardar Bhagwant Mann as well as CMs and senior politicians from several political parties. Shri Arvind Kejriwal called for cohesive development of the country on the occasion and said, “India will progress only if we stop fighting and start learning from each other. Despite attaining independence 75 years ago, our country has not progressed because of the kind of politicians that we have had, now some CMs and senior leaders are coming together to discuss the development of the country. Telangana Government has started a wonderful initiative to conduct free eye checkups of its residents, CM Bhagwant Mann and I will implement this scheme in Punjab and Delhi. CM K Chandrasekhar Rao had visited Delhi to see our Mohalla Clinics and on his return to the state, he implemented a similar initiative under the name of Basti Dawakhana. Tamil Nadu CM MK Stalin visited Delhi to see our government schools and he went back to his state and transformed the schools there and called me for the inauguration of these schools.”

He also took to the occasion to lambast the BJP and PM Modi for remote-controlling governors to harass elected governors. He said, “The Governor of Tamil Nadu has been troubling MK Stalin, Governor of Telangana has been troubling KCR, Governor of Punjab has been troubling Bhagwant Mann and LG of Delhi has been troubling me, it is not the Governor, but PM Narendra Modi who is troubling everyone. Instead of worrying about issues such as unemployment and inflation, the PM is busy thinking about which politician to bother using CBI-ED and Income Tax, our country cannot progress like this. The people of the country voted for the BJP with lots of hopes in 2014 and 2019, but their policies have destroyed the country, now the country is asking for change and there is an opportunity to bring change in 2024. BJP has to be uprooted and defeated in the 2024 elections and a government that thinks about the progress of the country and deals with issues such as unemployment, inflation, education, health needs to be elected to power.”

AAP National Convenor Shri Arvind Kejriwal said, “I would like to thank Shri K Chandrasekhar Rao for inviting me to this important event and giving me this occasion to speak to the people gathered over here today. This is a great occasion because of two key decisions that the Telangana CM has announced. The first is that the Telangana government will conduct a free eye checkup for all of its residents. There are around 4 crore people who live in the state and Shri K Chandrasekhar Rao has decided to conduct everyone’s checkup for free. If there is any kind of defect in any person’s eyes then they will be provided the necessary medicines free of cost. If a person requires spectacles then this will also be provided free of cost and if someone requires a surgery then the state government will also bear the expense of such a procedure. I think this is a landmark decision by the popular Chief Minister of Telangana. Today we sat down together with the officials of the state government and understood the planning behind this initiative. I think it has been planned very well and there was an element of learning for all of us who interacted with the officials who will be implementing this scheme in Telangana. I have decided to implement such a scheme in Delhi as well. The Chief Minister of Punjab Sardar Bhagwant Mann has also announced that he will implement this scheme in his state.”

I sincerely believe that if all the politicians within our country decide to learn from each other, only then will our country become a developed nation: Arvind Kejriwal

He added, “Then Shri K Chandrasekhar Rao showed us this magnificent building built over here. There are 33 districts in the state of Telangana. He informed us that in 17 of these districts, the Telangana government has built the District Integrated Official Complex, which means that all the offices at the district level, including the Collector’s Office, Irrigation Department, and so on are located within the same building. So, when a citizen comes here with a complaint, he will not be forced to run around to different offices and all of their work can be done within the same building. This is the intention behind such a move. I hope to develop such a project in Delhi as well. I sincerely believe that if all the politicians within our country decide to learn from each other, only then will our country become a developed nation. We do not need to fight against one other in the political arena, we need to learn from each other. In Delhi, we have built really good Mohalla Clinics and the Chief Minister of Telangana Shri K Chandrasekhar Rao came to Delhi to visit our Mohalla Clinics and learnt about it. He spoke to the doctors and the medical staff over there and understood its method of functioning. Then he came back to his state and built something similar – Basti Dawakhana. I was very happy to see this. Similarly, the Chief Minister of Tamil Nadu Shri MK Stalin came to Delhi and visited the government schools over there. The Delhi Government has worked really hard to improve its government schools. They have become so good right now that parents are taking their children out of private schools and admitting them in the government schools of Delhi. The pass percentage last year for the government schools of Delhi was 99.7 percent. Shri MK Stalin visited our schools and understood its functioning and he went back to his state and built excellent government schools in Tamil Nadu. He also invited me for the inauguration of some of these schools.”

For the first time right now, some of the Chief Ministers of different states have decided to come together and to learn from each other to make their states better: Arvind Kejriwal

Chief Minister Shri Arvind Kejriwal said, “One question that has always troubled me is that our nation has been independent for 75 years now, but still we are not amongst the developed nations in the world. Why is that so? Singapore earned its independence after us. Japan was destroyed in the Second World War, but now it is more developed than us. Similarly, Germany was destroyed in the first World War, but now it has become more developed than us. Why is it that India has failed to keep in pace with such nations? It is because we have not had good politicians in the past. The politics of our country has not been one that has supported development. The politicians here are only concerned about bringing each other down. But for the first time right now, some of the Chief Ministers of different states have decided to come together and to learn from each other to make their states better. These CMs are not talking about politics, but talking about development and how to improve schools in their states. We are talking about how to improve hospitals and the irrigation system in the state, we are talking about how to make our farmers earn better.”

He said, “I remember when I was a student and studying in Class 10, at that time we would be told that the schools and hospitals in Kerala were of very good quality. If this was the case at that time, then why is it that by now, we have not been able to improve the schools and hospitals in other parts of the country? This is only because of our politics – our politicians have constantly been fighting each other. Today I say this with a lot of sadness, the politics in our country has become such that the Governor of Tamil Nadu is trying to create a problem for the ruling party in the state. Similarly, the Governor of Telangana is trying to create obstructions in the work of Shri K Chandrasekhar Rao. The Lieutenant Governor is trying to create obstructions in my work in Delhi. The Governor of Punjab is trying to create problems for Shri Bhagwant Mann. After all, why are these governors doing such things? It is not the governors, but Prime Minister Narendra Modi who is trying to obstruct all of these opposition-ruled state governments. The governors don’t have anything to gain from such activities. They are selected by the Union Government and live in luxury, they get an air-conditioned bungalow and chauffeur-driven cars, so they are bound to follow the orders that they get from Delhi. They get a call from the Prime Minister’s Office asking them to create problems in the work of Shri K Chandrasekhar Rao, Sardar Bhagwant Mann, Shri MK Stalin and so on. How will this country progress if the Prime Minister is involved in such petty politics?”

These people have made a mess of the economic situation of the country. In 2024, you have to bring in change in this country: Arvind Kejriwal

He concluded, “Today, there are several youths in our country that are unemployed, but the PM is not bothered about this at all. All that he is concerned about is which Chief Minister to trouble, on which politician to order a CBI raid on, and so on. The inflation is so high at the moment that families in our country are facing trouble in managing their expenses, but once again, the PM is not bothered about this at all. He is worried about which political party to bother and whose MLAs to buy to topple over an elected government. How will the country progress with such a kind of politics? In 2014 and 2019, the people of the country had voted for the BJP with a lot of faith, but they have failed to work on your issues. The country at the moment is desperately asking for change. These people have made a mess of the economic situation of the country. In 2024, you have to bring in change in this country. Ten years in politics is a long time and the BJP has failed to live up to the promises that they made to the people. In 2024, you have to vote for a government that will work to make India a developed nation, that will work on the issues of unemployment, inflation and development of government schools and hospitals.”