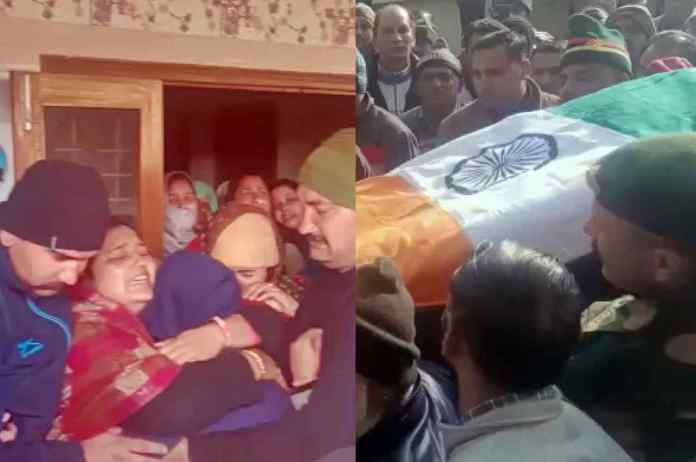 Una: Martyr Amrik Singh of Himachal Pradesh’s Una district was cremated on Monday. While patrolling in Kashmir, he was killed in an accident. On Monday, four days after the event, his body arrived at his home.

When the body of Havaldar Amrik Singh of Ganu Mandwara village in Gagret sub-division arrived at his home on Monday morning, tears began to flow uncontrollably.

When the army forces returned Havaldar Amrik Singh’s body with full military honours, even the stone hearts melted owing to the mother’s compassion and the anguish of the wife and son.

In the accident, Amrik Singh of Himachal’s Una district, Jawan Amit Sharma of Hamirpur district, and JCO Purushottam Singh of Jammu were killed.

On Monday, as Amrik’s remains was returned from Gagret to his native village with full military and official honours, heads bowed in tribute of this gallant son.

As soon as the dead body arrived in Ganu Mandwara with a procession of hundreds of people from Daulatpur, every eye became moist.

Amrik Singh, the martyr, was 39 years old. He was accepted into the Dogra Regiment in 2001.

This incident occurred in Machil, Kupwara. A vehicle slipped in the snow and plunged into a ditch, killing the jawan.