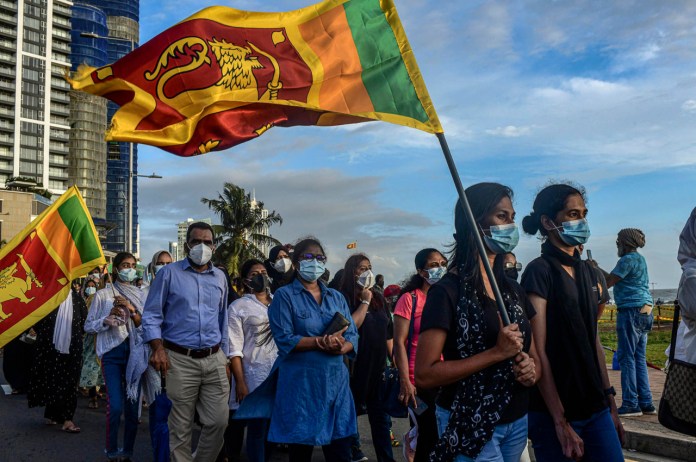 New Delhi: Sri Lanka and the International Monetary Fund (IMF) together have reached a preliminary agreement on an emergency loan to the crisis-hit nation and a formal announcement will be made on Thursday, four sources with firsthand knowledge of the matter said.

The island nation, which is heavily indebted and is experiencing its worst economic crisis in more than seven decades, has asked the international lender for up to $3 billion. For months, Sri Lankans have had severe shortages of essential items and exorbitant costs.

Requests for response were not immediately answered by IMF or Sri Lankan government spokespeople.

Also Read :- Rupee falls new low of 80.14 against US dollar after Powell’s statement on inflation

Ranil Wickremesinghe, the president of Sri Lanka, informed parliament on Tuesday that negotiations with the IMF had reached the “final stage” while presenting an interim budget for the remainder of the year.

The IMF management and its executive board normally have to approve staff-level agreements before the recipient countries can access funding.

In order to address concerns on the political front, a visiting IMF team spoke with Sri Lankan government representatives late into the night on Tuesday, including the treasury secretary, according to the sources. The majority of the technical aspects were pre-determined.

Also Read :- Rupee falls new low of 80.14 against US dollar after Powell’s statement on inflation

The 22 million-person nation was thrust into a political turmoil last month when former president Gotabaya Rajapaksa departed following a populist rebellion against a severe lack of essential items and exorbitant pricing.

Wickremesinghe, a six-time prime minister who also oversees the finance ministry, took Rajapaksa’s position and undertook many rounds of negotiations with the IMF delegation.

The nation is also trying to restructure its around $29 billion debt, and Japan is anticipated to take the lead in negotiations with other significant creditors including China. Additionally, Sri Lanka intends to initiate restructuring discussions as soon as possible with the private creditors who own the majority of its $19 billion in government bonds.

According to S&P Global, Sri Lanka missed interest payments on bonds due on June 3, June 28, and July 18, as well as a principle payment due on July 25.