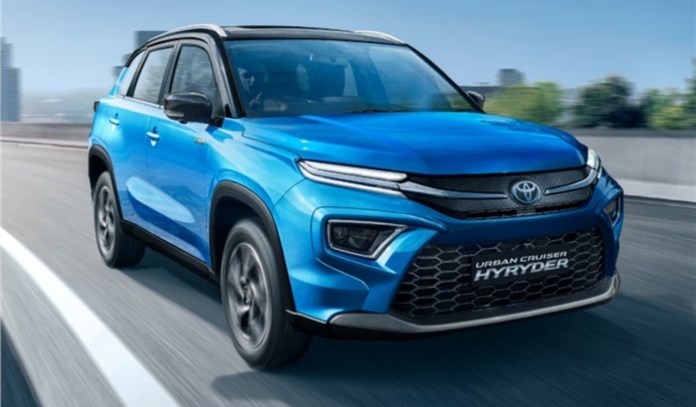 Share
Facebook
Twitter
Pinterest
WhatsApp
New Delhi: The CNG variant of Toyota’s new SUV Urban Cruiser HyRyder is about to be launched in the Indian market very soon. The Toyota HyRyder CNG is all set for launch in December 2022. Toyota’s first CNG powered SUV, the HyRyder CNG will be powered by a 1.5L K15C petrol engine.
The CNG kit will be housed in the boot of the SUV. Bookings for the HyRyder CNG are now open across all Toyota dealerships across India and deliveries will commence from the day of launch.
The HyRyder CNG will be priced ₹30,000-40,000 more expensive than the petrol-powered variant (Price- ₹10.48 lakh). Apart from the HyRyder, a CNG variant of its badge engineered sibling Maruti Suzuki Grand Vitara will also be launched soon.

Maruti Suzuki is India’s largest CNG car manufacturer with which Toyota has tied up. The HyRyder CNG will use the 1.5L naturally aspirated K15C petrol engine along with a factory-fitted CNG kit, giving it petrol-CNG dual fuel capability. On engine petrol, it will be capable of generating 102bhp power and 137nm torque.
It gets 5 speed manual and 6 speed torque converter automatic options. Toyota is likely to offer both the gearbox options on the Hyryder CNG. The power and torque output will be significantly lower when running with the CNG powertrain.

The Toyota Urban Cruiser HyRyder CNG version will be available in two variants, S and G. This version will not be offered with a hybrid powertrain. This 1.5-litre K-series petrol engine generates 102bhp power and 136.8Nm torque. It is offered with a five-speed manual transmission only and the company claims that the model will return a mileage of 26.1km/kg.