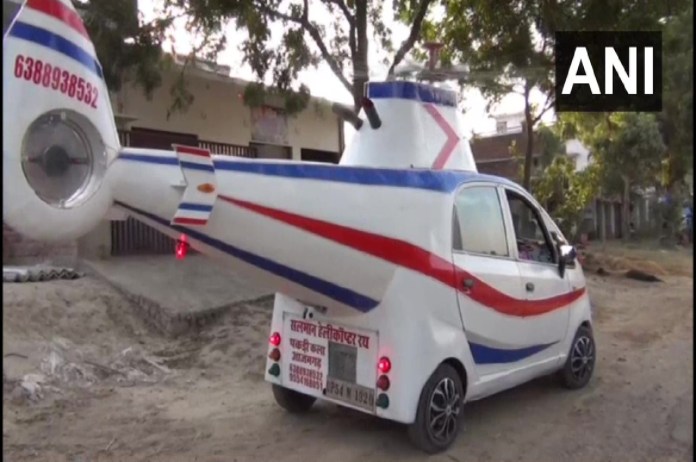 New Delhi: ‘Who says there can’t be a hole in the sky, just throw a stone with your heart’, this is no longer just a saying. A carpenter from Azamgarh has demonstrated this.

After four months of hard work and spending three lakh rupees, he has made a helicopter. The only difference is that this helicopter runs on the road, not in the air.

Made in four months by spending three lakh rupees

According to the news agency ANI, Salman, a carpenter from Azamgarh in Uttar Pradesh, made his dreams come true by making a helicopter that would run on the road. Salman has converted his Tata Nano car into a chopper after four months of hard work. This helicopter of Salman has become a topic of discussion and curiosity in the entire area.

Read More  – TATA TIAGO EV: ALL YOU NEED TO KNOW ABOUT!

This helicopter runs on the road

Salman told news agency ANI that I have made a helicopter which runs on the road. He told that the people of the area have now demanded to make more such helicopters. He told that his aim behind this project is to brighten the name of his village and district.

Government and big companies help us

He said that he has given a gift to those who have never been able to sit in a helicopter in their life. He has demanded the government and big companies to help us and give flight to our dreams. At the same time, villagers are gathering in large numbers to take a tour of this indigenous helicopter. People are taking a tour of it one by one.

After releasing the photo from the agency, Salman’s desi helicopter is becoming fiercely viral on social media. The people of the surrounding villages are also coming to see Salman’s helicopter. Salman works as a carpenter by profession.