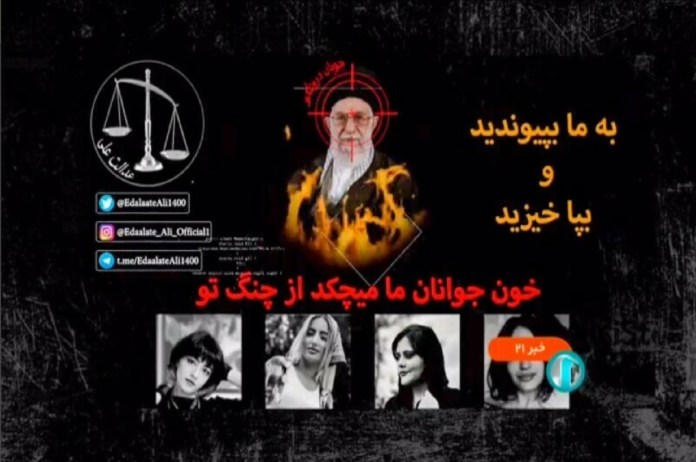 The footage of the evening news showed an image of Khamenei surrounded by flames next to pictures of three women killed in recent protests and of 22-year-old Mahsa Amini, whose death sparked nationwide demonstrations.

“The blood of our youths is on your hands,” read a message on screen in the broadcast that started at 9pm local time Saturday.

#BREAKING The Edalat-e Ali hacktivist group hacked the Iranian state TV's live news broadcast, displaying a photo of Khamenei with the verse "The Blood of Our Youths Is on Your Hands" along with photos of #MahsaAmini and three other girls killed in #IranProtests. pic.twitter.com/dYM7flUBQt

One of the captions read “join us and rise up”, whilst another said “our youths’ blood is dripping off your paws”, reports BBC.

The interruption lasted only a few seconds before being cut off.

Iran’s Tasnim news agency confirmed that the evening news broadcast “was hacked for a few moments by anti-revolutionary agents”.

The action was claimed by the Edalat-e Ali (Ali’s Justice) hacktivist group.

Last year the group hacked security cameras and exposed the mistreatment of prisoners in a jail mostly holding political prisoners.

Anger flared after the death of Ayatollah Amini on September 16, three days after her arrest in Tehran by the notorious morality police for an alleged breach of the Islamic republic’s strict dress code for women.

The death sparked a massive protest with women removing their headscarves in protest at the compulsory wearing of hijabs.

Rights groups claim that more than 150 people have been killed since the protests in the Islamic Republic began on 17 September.