A video of incident where a man trying to fix a car is crushed by a car has gone viral on the internet. Watch video: 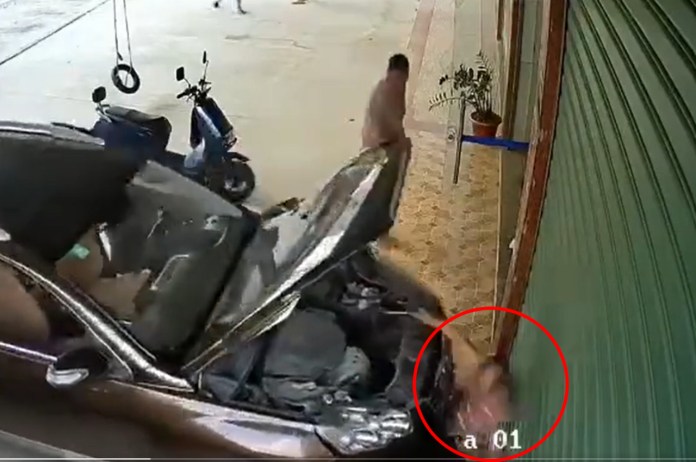 New Delhi: Repairing a broken down car is a task that requires technical expertise and knowledge of the precautions needed when working on a broken down vehicle. The task is best handled by professionals who excel in it or are trained with the necessary knowledge.

However, very often people take matters into their own hands and try to solve a technical problem that they do not know. A video of a similar incident where a man trying to fix a car is crushed by a car has gone viral on the internet. While it is not certain whether the man in the video is a professional mechanic or not, the incident leads us to believe the latter.

Now a viral video shows the mechanic opening the hood of the car from inside and later returning to check the mechanical parts of the car. The mechanic can later beaccident  seen making some changes to the front of the car.

Based on the scenario, he was probably trying to start the car, which starts out of nowhere, accelerates, and crashes into the steel gate in front of him, while the mechanic gets crushed between the hood and the steel gate. The mechanic in the video appears to be seriously injured. At the end of the video, people gather to help in any way they can.

A video of the entire incident was posted on Twitter under the name Deepak Prabhu. The video’s caption said: “If an automated vehicle breaks down, never stand in front of the vehicle.” He added, saying, “Please warn your friends and relatives. Share this message as an example.” The video now has more than 738 thousand views and around 13 thousand likes on the microblogging site.

#WARNING
If an automatic vehicle breaks down, never stand in front of the vehicle.
Please warn your friends and relatives.
Share this message as an example. pic.twitter.com/P2OPQDXgvg

Many social media users tried to guess the nature of the car’s gearbox after watching the viral video. One social media user commented on the post saying, “This car is not an AT but an MT. Many people put it in 1st gear without applying the handbrake when they park it. They forget that the car has a gear.” when trying to start the car. All modern AT cars have many safety features to prevent such incidents.”

While one other user disputed the guesstimate that it was an MT car, saying: “No, this is an AMT mod because the MT car won’t start unless the clutch is depressed. What I’m getting is that it unknowingly shifted into Drive.” gear (D) then tried to engage the starter briefly and when the car started moving it started to move because it doesn’t need a clutch to operate.”