WATCH: Another PDA stunt on bike goes viral in Chhattisgarh 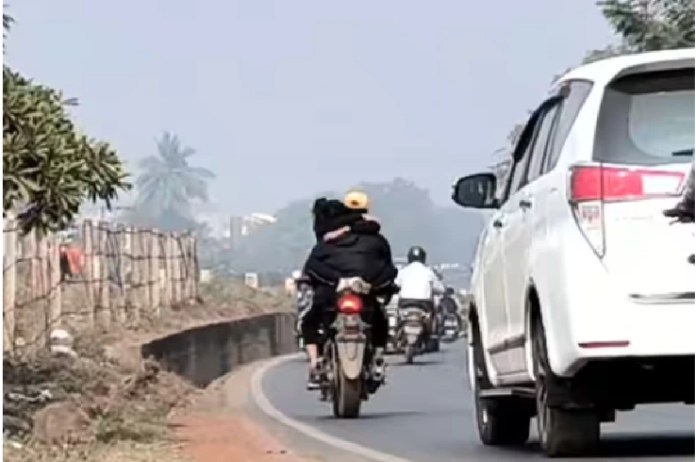 Chhattisgarh: After the Lucknow bike romance incident, now another video of a couple romancing on a moving bike is going viral on social media, this incident happened in the Durg district of Chhattisgarh. In the video, a couple is seen romancing on a running bike, on a busy road. After the clip gets viral, the police arrested the couple.

According to information, the viral video has been shot on the streets of Bhilai. In the clip, a girl can be seen sitting on the tank of a bike and hugging her partner. From the investigation, the boy is identified as Javed, who is 27 years old.

As per the information, the youth was driving a bike without a number plate. Accused Javed owns a furniture shop in Vaishali Nagar. He bought a stolen bike worth Rs 1.5 lakh from Rajnandgaon for only Rs 9,000.

In the viral clip, the girl is seen hugging the boy and kissing him. Reportedly, the couple left the Jubilee Stadium at 9:50 am through a back road. Then they stay in front of Bhelwa Talab in Nehru Nagar for some time. Later they went to a restaurant in Smriti Nagar. But due to lack of identity, the police could not take them into custody.

Later, On January 22 (Sunday), Durg police were able to track the bike and took the couple into custody. After being arrested, the accused Javed told the police that he did all this to make his ex-girlfriend jealous.