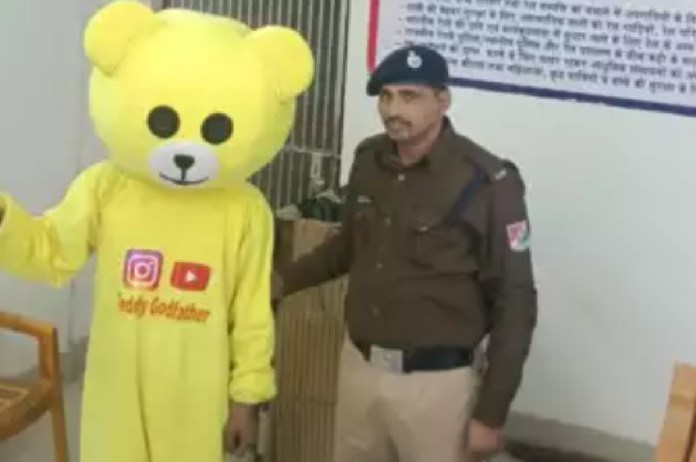 Gorakhpur: A video from Uttar Pradesh’s Gorakhpur railway track is going viral on social media in which a man is seen dancing in a teddy bear costume. Later, he has been arrested by Railway Protection Force(RPF).

The arrested man has been identified as Sunil Kumar (22) resident of Kundaghat. He has 1,600 followers on his Youtube Channel and has an Instagram account called ‘Teddy Godfather’ on which he posted videos in teddy costumes. The accused earns a living by playing the role of a teddy bear at children’s birthday parties, fairs and public parks often at the request of young couples. A resident of Kundaghat under Shahpur police limits, the accused has been arrested under section 145 of the Railway Act.

Suraj’s stunts are an example of how social media influencers’ constant hunt for new content is turning out to be a key challenge for law enforcement agencies.

According to RPF, the video of Sunil Kumar’s act was shot by locals. The video also showed the accused jumping the manned level crossing even as the express was passing.

“Sunil not only violated railway norms but also risked his life. He was arrested by the sub-inspector Deepak of Gorakhpur Cantt railway station RPF post,” said Chandra Mohan Mishra, senior commandant of the northeastern railway (NER). 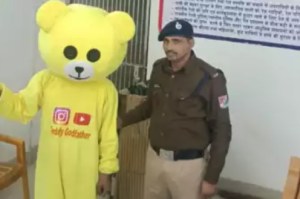 Recently, a woman identified as Vaishali Chaudhary Khutail stopped her car on a Ghaziabad highway to shoot a reel. In the short video, she is seen striking poses as other vehicles pass by which attracted criticism, with many accusing her of putting herself and others at risk by stopping her car on a freeway, all for a social media post. Ghaziabad police responded by charging a fine of ₹ 17,000 to her.